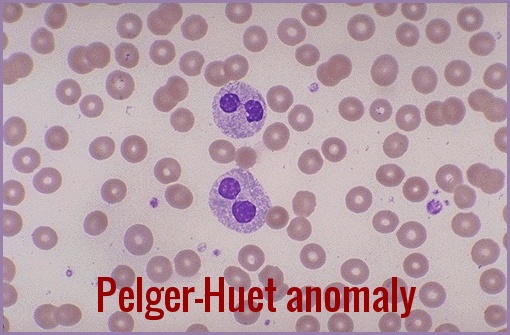 Pelger-Huët anomaly is an autosomal dominant benign condition found in 1 in 6000 individuals.

The characteristic leukocyte appearance was first reported in 1928 by Pelger, a Dutch hematologist, who described leukocytes with dumbbell-shaped bilobed nuclei, a reduced number of nuclear segments, and coarse clumping of the nuclear chromatin.

In 1931 Huet, a Dutch pediatrician, identified it as an inherited disorder.

Neutrophils contain not more than two lobes to the nuclei (spectacle-shaped nuclei) and “band forms” are frequent. In the inherited anomaly, affected neutrophils with bilobed nuclei make up 60-90% of the neutrophils seen.

Pseudo Pelger-Huët anomaly and micromegakaryocytes are considered to be highly characteristic and highly pathognomonic of MDS.

Usually, the congenital form is not associated with thrombocytopenia and leukopenia, so if these features are present more detailed search for myelodysplasia is warranted, as pseudo-Pelger–Huët anomaly can be an early feature of myelodysplasia.