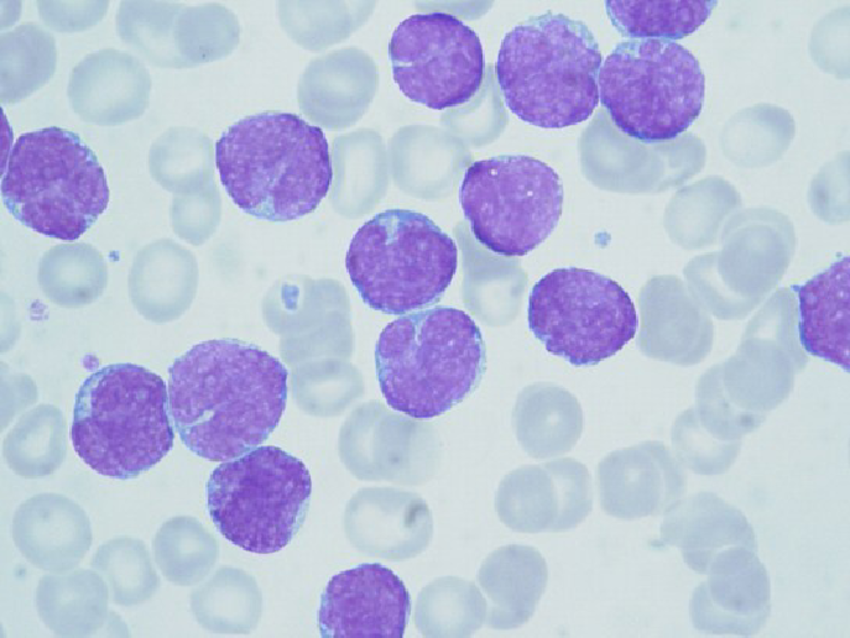 Peripheral blood smear. A population of mantle cells with a cleaved nucleus and paucity of cytoplasm

Lymphocytes are white blood cells that serve primarily as the body’s adaptive immune system and provide humoral or cell-mediated immunity against a variety of bacterial, viral, or other pathogens. They are comprised mainly of T, B, and natural killer (NK) cells, and the body typically maintains the absolute lymphocyte count (ALC) in a range of fewer than 4,000 lymphocytes per uL. Elevation of the lymphocyte count above this level is most commonly due to a reactive lymphocytosis, the body’s normal response to an acute infection or inflammatory condition.

You can have a higher than normal lymphocyte count but have few, if any, symptoms. It usually occurs after an illness and is harmless and temporary. But it might represent something more serious, such as blood cancer or a chronic infection.

Your doctor might perform other tests to determine if your lymphocyte count is a cause for concern.

If your doctor determines that your lymphocyte count is high, the test result might be evidence of one of the following conditions:

Specific causes of lymphocytosis include:

A 71-year-old man with a history of atypical chronic lymphocytic leukemia (CLL) last treated in 2007 with a rituximab and chlorambucil-based regimen presents with an increasing M protein of 4.1 g/dL (IgG κ). The laboratory findings were as follows: WBC, 7.4 × 109/L with 29 percent neutrophils, 66 percent lymphocytes, and 5 percent monocytes; RBC, 3.94 × 1012/L; hemoglobin, 11.0 g/dL; mean corpuscular volume, 83 fL; platelets, 91 × 109/L. The patient’s bone marrow was hypercellular (90%) with a marked lymphoid infiltrate present in nodular (paratrabecular and interstitial) and focal diffuse patterns involving 75 percent of bone marrow cellularity. Lymphocytes were small and round with condensed chromatin and occasional plasmacytoid lymphocytes were also observed. The karyotype of the bone marrow was 46,XY,add(9)(p24),der(11)del(11)(p13)del(11)(q23) in four cells with a sideline containing all of these abnormalities and +13 in two cells, and an unrelated clone showing 45,X,–Y in six cells, with 46,XY in seven cells. Fluorescence in situ hybridization (FISH) found a deletion of the 13q14.3 region and was negative for deletions of TP53, ATM, and LAMP1, and aneuploidy for chromosome 12.

A slide review is appropriate in all patients with an unexplained lymphocytosis in order to confirm the automated cell counts or to perform a manual differential for leukocyte classification. In manually prepared blood smears, larger white blood cells tend to collect at the edges of the smear and in the feathered edge. Good practice for slide review requires assessments of all cell types (leukocytes, red blood cells [RBCs], and platelets) in both quantity and quality. It is not uncommon for fragile leukocytes such as in CLL, infectious mononucleosis, or acute leukemia to smudge on blood smears. In these situations, a few drops of albumin can be added to peripheral blood before preparing the blood smear. These “albumin smears” allow for proper identification of leukocytes and reduce the number of “smudge” or “basket” cells. However, the examination of RBCs and platelets should still be performed on the original blood smear because the albumin can affect platelet and erythrocyte morphology. 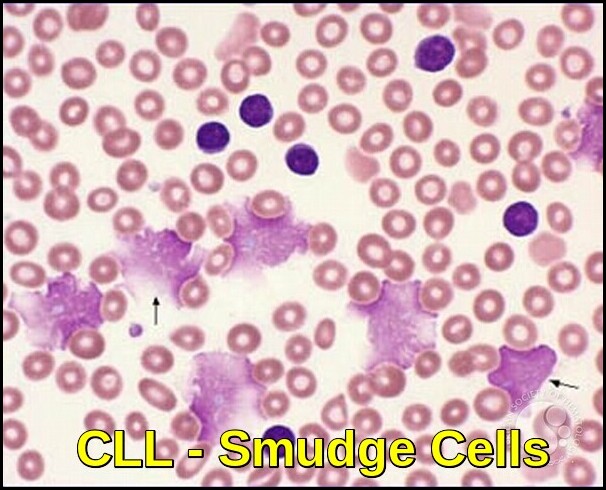 While most of these reactive lymphocytoses are pleomorphic, a few important exceptions are worth mentioning. The first is Bordetella pertussis, the causative agent of whooping cough. The lymphocytes of B. pertussis are small and deeply clefted with mature chromatin. 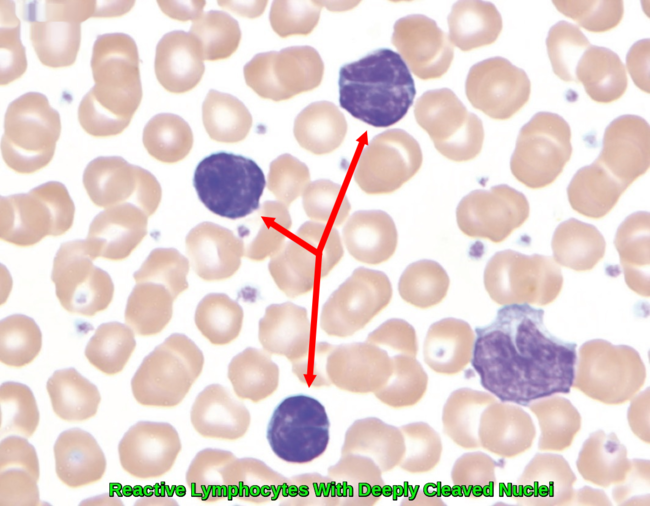 Bordetella pertussis infection in a child in a child showing three reactive lymphocytes that are small with deeply cleaved nuclei and scant cytoplasm, in contrast with the monocyte in the lower right-hand corner. Reprinted with permission from I Pereira, TI George, DA Arber.

As this is commonly seen in the pediatric and pregnant populations, the clinical correlation will readily separate this from lymphomas, which can show similar morphologic features (e.g. follicular lymphoma or Sézary syndrome).

The second exception is polyclonal B-lymphocytosis, which typically shows lymphocytes with distinct nuclear clefts but will demonstrate a spectrum of morphologic changes including nuclear lobation and binucleate forms. This uncommon disorder is found in young to middle-aged female smokers with a high association with human leukocyte antigen DR7, and several genetic abnormalities have also been documented. 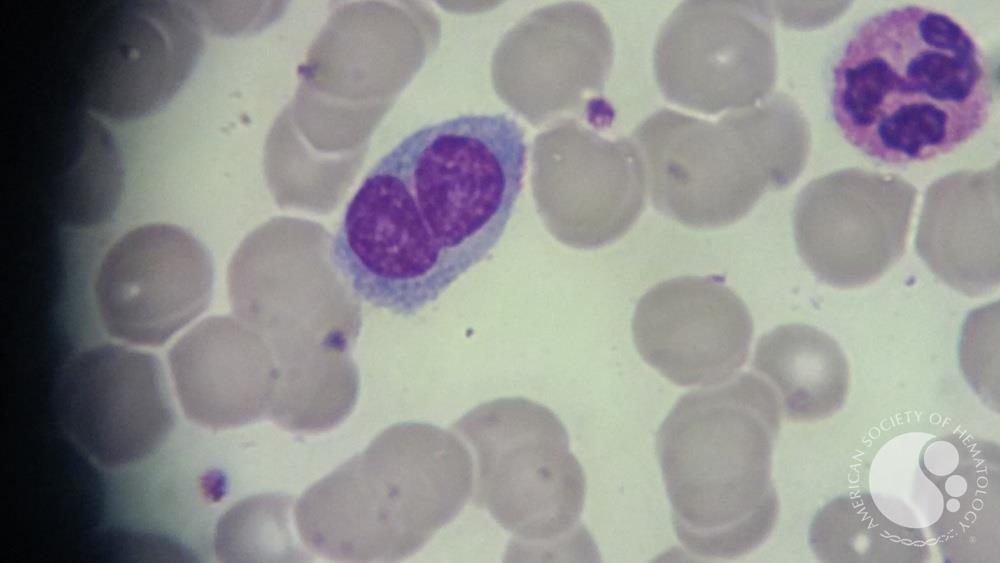 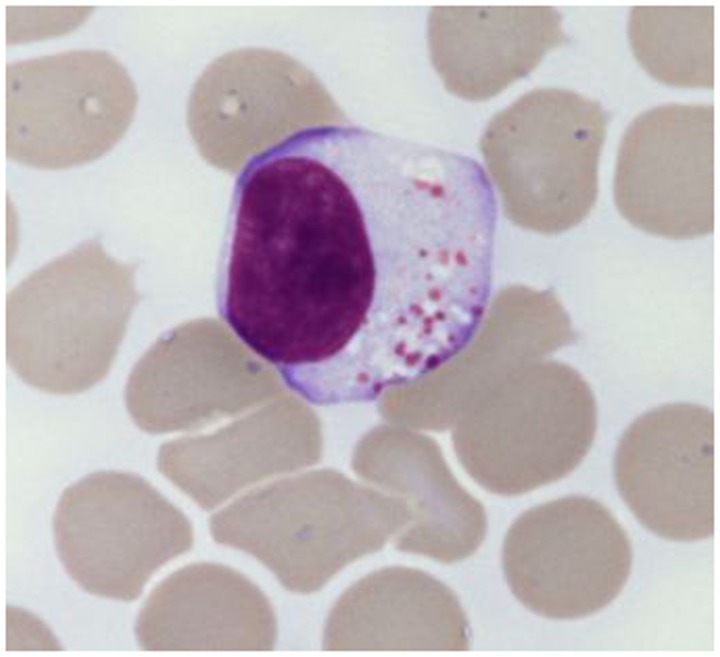 However, the persistence of a large granular lymphocytosis with accompanying neutropenia and variable anemia should raise suspicion for large granular lymphocytic leukemia. This is typically T cell in origin, though a chronic lymphoproliferative disorder of natural killer cells is also well described. Flow cytometry is recommended in these cases, followed by either T-cell clonality or KIR analysis, if involving T cells or natural killer cells, respectively.

Lymphoma cells tend to be monomorphic in appearance. While a blood smear may contain a subset of lymphoma cells, these cells will resemble one another and stand out against a background of normal bland lymphocytes. While CLL is the most common leukemia in adults in the western world and is frequently seen in peripheral blood (or its monoclonal B-cell lymphocytosis counterpart), peripheral blood involvement by bone marrow lymphoma is found in up to 30 percent of subjects in some studies. Lymphoma cells will show a wide variety of morphologic appearance, and this appearance raises a differential diagnosis as shown in Figure 2. 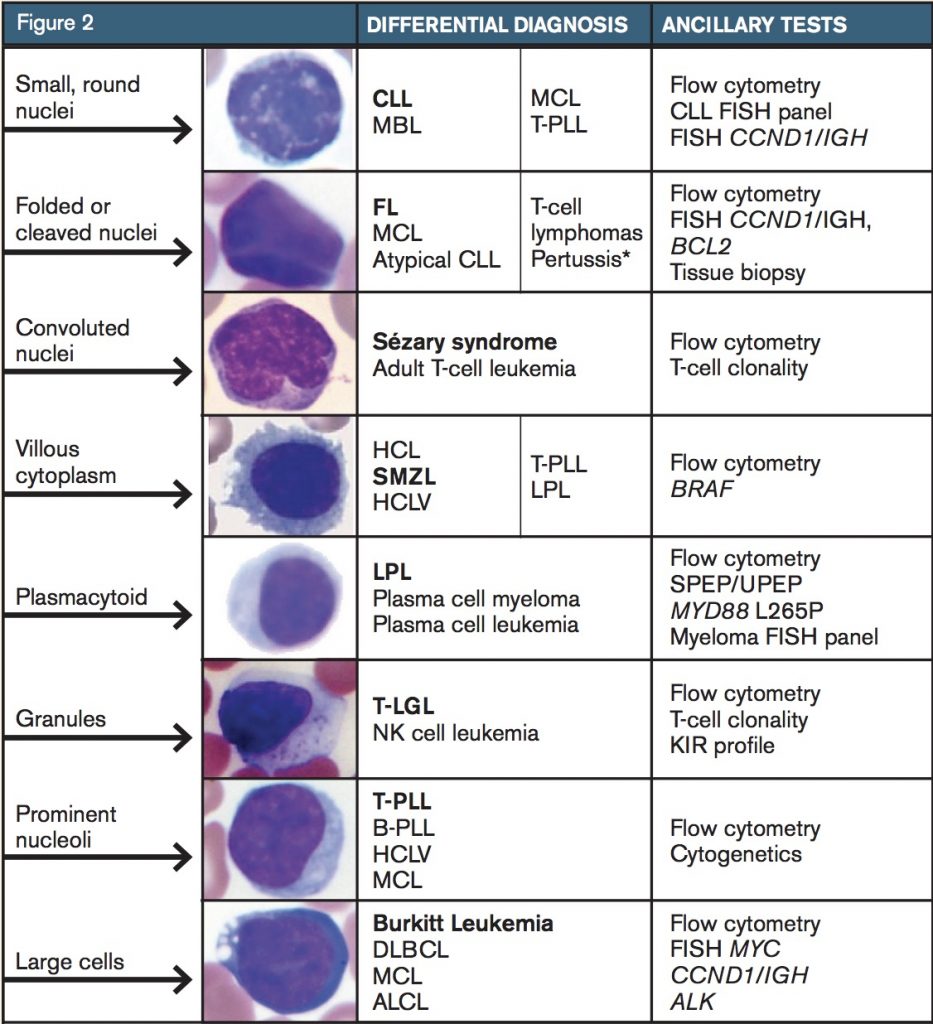 Further identification of the type of lymphoproliferative disorder typically proceeds with flow cytometry. While each laboratory has its own cocktail of antibodies used for flow cytometry, consensus guidelines have been published. While the results from flow cytometry narrow down one’s differential diagnosis to a shortlist, additional genetic or other ancillary studies are typically needed for confirmation, such as FISH for CCND1/IGH to evaluate for mantle cell lymphoma. Additionally, bone marrow biopsy or biopsy of another involved site is necessary for a final diagnosis. 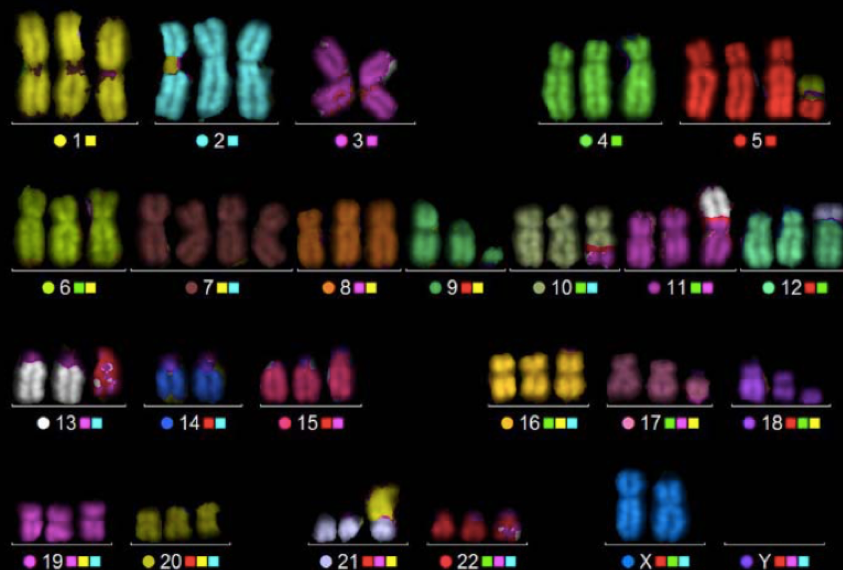 A common question is when should flow cytometry be performed? Some studies have looked at this question in adults. In one study, the authors retrospectively reviewed flow cytometry results of 71 patients 50 years of age and older with an absolute lymphocyte count of 4 × 109/L or greater that had been called suspicious for a lymphoproliferative disorder after smear review by a pathologist. Using receiver operating characteristic (ROC) analysis, they found that an absolute lymphocyte count greater than 6.7 × 109/L for patients 50 to 67 years of age, and 4 × 109/L or greater for patients older than 67 years had a 95 percent sensitivity and 76 percent specificity for predicting an abnormal flow cytometry phenotype. A more recent retrospective single-center study examined 71 adults with newly detected lymphocytosis greater than 5 × 109/L in a consecutive three-month period and found that 6.8 × 109/L was the best cut-off value for predicting a lymphoproliferative disorder with ROC analysis (sensitivity 90%, specificity 59%). In my own practice, other triggers for flow cytometry include a persistent unexplained lymphocytosis or a morphology that does not correlate with the diagnosis.

Review of the patient’s original diagnostic material confirmed that the atypical CLL diagnosis was given based on immunophenotypic expression of FMC7, in addition to the usual phenotype for CLL (CD20+, CD5+, CD23+). Morphology in the current blood and bone marrow showed lymphocytes and plasmacytoid cells and not the usual small round lymphocytes with coarsely clumped chromatin (“soccer balls”) of CLL; the plasmacytoid cells were not readily identified on the earlier bone marrow smears. The performed flow cytometry on the patient’s bone marrow identified a κ light chain–restricted B-cell population that expressed CD19, CD20, CD10, and CD23, and lacked expression of CD5 and CD200. Additionally, a κ light chain–restricted plasma cell population was identified. 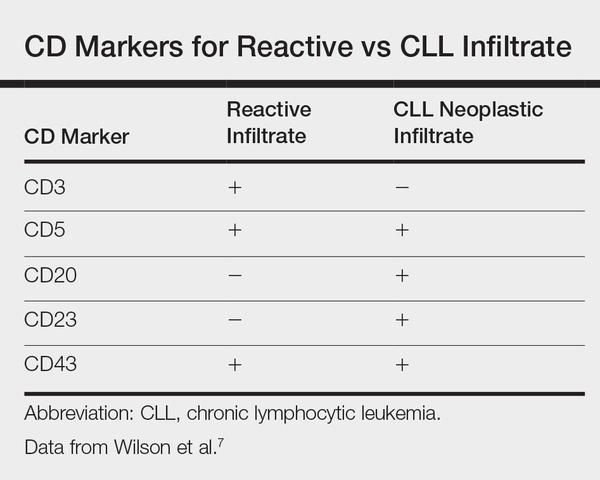 The cytogenetic karyotype, while abnormal, was not specific for any particular B-cell lymphoma; the lack of t(11;14) and t(14;18) argued against both mantle cell lymphoma and follicular lymphoma. Molecular testing for MYD88 L265P mutation was performed and was negative. DNA polymerase chain reaction analysis for immunoglobulin heavy chain gene (IGH) was performed on the 2007 bone marrow and on the current 2015 bone marrow. A clone was detected in both samples that was identical in amplicon size.