The question of whether human tumors express antigens that can be recognized by the immune system has been answered with a resounding YES.

Many tumor cells produce antigens, which may be released in the bloodstream or remain on the cell surface. Antigens have been identified in most of the human cancers, including Burkitt lymphoma, neuroblastoma, melanoma, osteosarcoma, renal cell carcinoma, breast cancer, prostate cancer, lung carcinoma, and colon cancer. A key role of the immune system is the detection of these antigens to permit subsequent targeting for eradication.

However, despite their foreign structure, the immune response to tumor antigens varies and is often insufficient to prevent tumor growth.

TSAs and TAAs typically are portions of intracellular molecules expressed on the cell surface as part of the major histocompatibility complex.

Suggested mechanisms of origin for tumor antigens include:

The immune response to foreign antigens consists of:

Most humoral responses cannot prevent tumor growth. However, effector cells, such as T cells, macrophages, and natural killer cells, have relatively effective tumoricidal abilities. Effector cell activity is induced by cells that present tumor-specific antigens (TSAs) or tumor-associated antigens (TAAs) on their surface (these cells are called antigen-presenting cells) and is supported by cytokines (eg, interleukins, interferons). Despite the activity of effector cells, host immunoreactivity may fail to control tumor occurrence and growth. 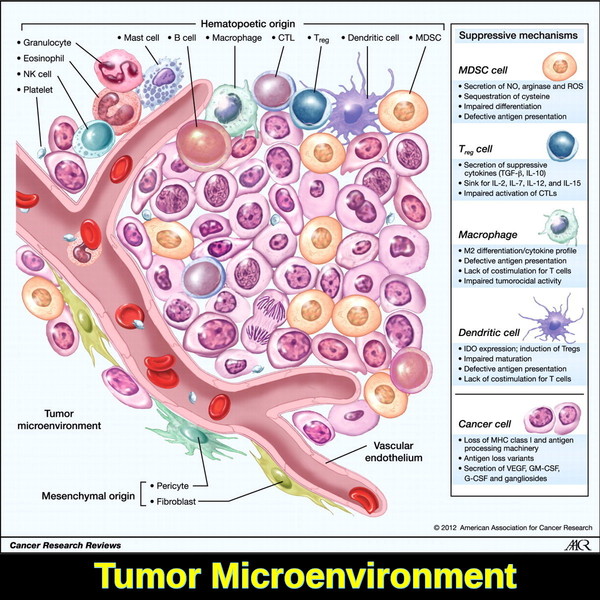 The T cell is the primary cell responsible for direct recognition and killing of tumor cells. T cells carry out immunologic surveillance, then proliferate and destroy newly transformed tumor cells after recognizing TAAs. The T-cell response to tumors is modulated by other cells of the immune system; some cells require the presence of humoral antibodies directed against the tumor cells (antibody-dependent cellular cytotoxicity) to initiate the interactions that lead to the death of tumor cells. In contrast, suppressor T cells inhibit the immune response against tumors.

Cytotoxic T lymphocytes (CTLs) recognize antigens on target cells and lyse these cells. These antigens may be cell surface proteins or may be intracellular proteins (eg, TAAs) that are expressed on the surface in combination with class I major Histocompatibility complex (MHC) molecules.

T cell-mediated cytotoxicity can be used for cancer immunotherapy treatments. This type of therapy includes the use of specific T-cell subsets to kill cancer cells. Most T-cells act via antigen-specific receptors, the T-Cell Receptors (TCRs), which are accompanied by a glycoprotein CD8 or CD4. Depending on which MHC class molecule the glycoprotein has to bind, CD8 or CD4 will be expressed by the T-cell. 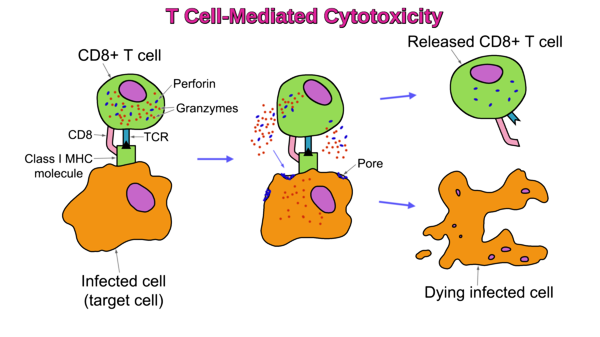 Tumor-specific CTLs have been found in:

Natural killer (NK) cells are another population of effector cells with tumoricidal activity. In contrast to CTLs, NK cells lack the receptor for antigen detection but can still recognize normal cells infected with viruses or tumor cells. Their tumoricidal activity is termed natural because it is not induced by a specific antigen. The mechanism by which NK cells discriminate between normal and abnormal cells is under study. Evidence suggests that class I MHC molecules on the surface of normal cells inhibit NK cells and prevent lysis. Thus, the decreased level of class I molecule expression characteristic of many tumor cells may allow activation of NK cells and subsequent tumor lysis. 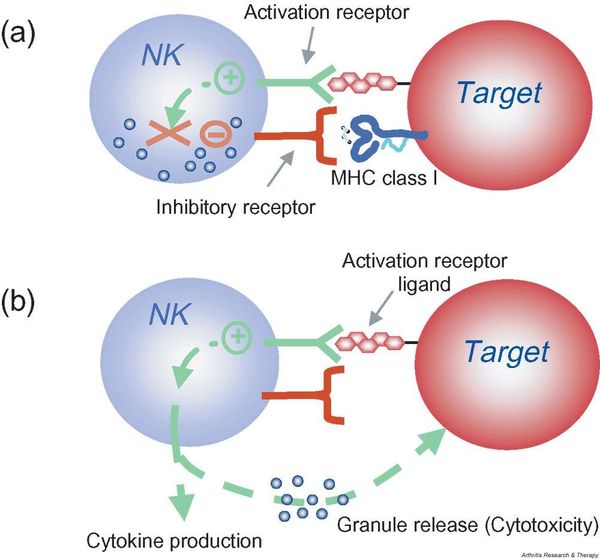 Macrophages can kill specific tumor cells when activated by a combination of factors, including lymphokines (soluble factors produced by T cells) and interferon. They are less effective than T-cell–mediated cytotoxic mechanisms. Under certain circumstances, macrophages may present TAAs to T cells and stimulate tumor-specific immune response. There are at least 2 classes of tumor-associated macrophages (TAM):

Recently this classification was revisited. Currently M1 and M2 are considered to exist on a continuum until they maximally differentiate (polarize) into M1 and M2. Such polarization can vary over time and depends on the stage and type of cancer as well as treatments. 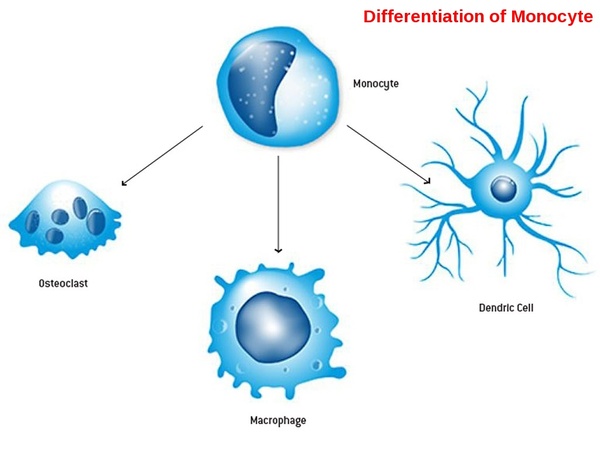 Regulatory T cells are normally present in the body and help prevent autoimmune reactions. They are produced during the active phase of immune responses to pathogens and limit the strong immune response that could damage the host. Accumulation of these cells in cancers inhibits antitumor immune responses.

Myeloid-derived suppressor cells consist of immature myeloid cells and their precursors. These cells increase in number in cancer as well as inflammation and infection. The cells have potent immune suppressive activity. Two populations of these cells are recognized:

In contrast to T-cell cytotoxic immunity, humoral antibodies do not appear to confer significant protection against tumor growth. Most antibodies cannot recognize TAAs. Regardless, humoral antibodies that react with tumor cells in vitro have been detected in the sera of patients with various tumors, including:

Cytotoxic antibodies are directed against surface antigens of tumor cells. These antibodies can exert anti-tumor effects through complement fixation or by serving as a flag for destruction of tumor cells by T cells (antibody-dependent cell-mediated cytotoxicity). Another population of humoral antibodies, called enhancing antibodies (blocking antibodies), may actually favor rather than inhibit tumor growth. The mechanisms and relative importance of such immunologic enhancement are not well understood.

Although many tumors are eliminated by the immune system (and thus are never detected), others continue to grow despite the presence of TAAs. Several mechanisms have been proposed to explain this deficient host response to the TAA, including the following:

Tumor-associated antigens (TAAs) can help diagnose various tumors and sometimes determine the response to therapy or recurrence. An ideal tumor marker would be released only from tumor tissue, be specific for a given tumor type, be detectable at low levels of tumor cell burden, have a direct relationship to the tumor cell burden, and be present in all patients with the tumor. However, although most tumors release detectable antigenic macromolecules into the circulation, no tumor marker has all the requisite characteristics to provide enough specificity or sensitivity to be used in early diagnosis or mass cancer screening programs. 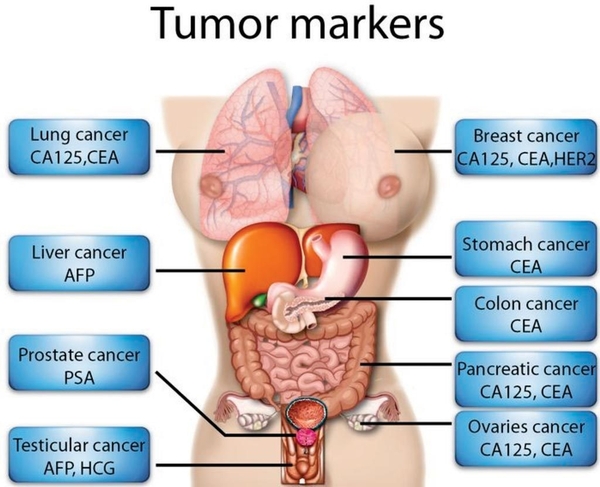 Carcinoembryonic antigen (CEA) is a protein-polysaccharide complex present in colon carcinomas and in normal fetal intestine, pancreas, and liver. Blood levels are elevated in patients with colon carcinoma, but the specificity is relatively low because positive results also occur in heavy cigarette smokers and in patients with cirrhosis, ulcerative colitis, and other cancers (eg, breast, pancreas, bladder, ovary, cervix). Monitoring CEA levels may be useful for detecting cancer recurrence after tumor excision if the patient initially had an elevated CEA and for refining estimates of prognosis by stage.

Alpha-fetoprotein, a normal product of fetal liver cells, is also present in the sera of patients with primary hepatocellular carcinoma, nonseminomatous germ cell tumors, and, frequently, ovarian or testicular embryonal carcinoma. Levels are sometimes useful for estimating prognosis or, less often, for diagnosis.

Beta subunit of human chorionic gonadotropin (beta-hCG), measured by immunoassay, is the major clinical marker in women with gestational trophoblastic neoplasia (GTN)—a disease spectrum that includes hydatidiform mole, nonmetastatic GTN, and metastatic GTN—and in about two-thirds of men with testicular embryonal carcinoma or choriocarcinoma. The beta subunit is measured because it is specific for hCG. This marker is present in low levels in healthy people. Levels are elevated during pregnancy.

Prostate-specific antigen (PSA), a glycoprotein located in ductal epithelial cells of the prostate gland, can be detected in low concentrations in the sera of healthy men. Using an appropriate upper limit of normal, assays with monoclonal antibodies detect elevated serum levels of PSA in about 90% of patients with advanced prostate cancer, even in the absence of defined metastatic disease. It is more sensitive than prostatic acid phosphatase. However, because PSA is elevated in other conditions (eg, benign prostatic hypertrophy, prostatitis, recent GU tract instrumentation), it is less specific. PSA can be used to monitor recurrence after prostatic carcinoma has been diagnosed and treated.

CA 125 is clinically useful for screening, diagnosing, and monitoring therapy for ovarian cancer, although any peritoneal inflammatory process and some other cancers can increase levels.

Beta-2 microglobulin is often elevated in multiple myeloma and in some lymphomas. Its primary use is in prognosis.

CA 19-9 was originally developed to detect colorectal cancer but proved more sensitive for pancreatic cancer. It is primarily used to judge the response to treatment in patients with advanced pancreatic cancers. CA 19-9 can also be elevated in other GI cancers, particularly cancer of the bile ducts, and some benign bile duct and cholestatic disorders.

CA 15-3 and CA 27-29 are elevated in most patients with metastatic breast cancer. Levels may also be elevated in other conditions. These markers are primarily used to monitor the response to therapy.

Chromogranin A is used as a marker for carcinoid and other neuroendocrine tumors. Sensitivity and specificity for neuroendocrine tumors can exceed 75%, and diagnostic accuracy is higher with diffuse than with localized tumors. Levels can be elevated in other cancers, such as lung and prostate, and some benign disorders (eg, primary hypertension, chronic kidney disease, chronic atrophic gastritis).

Thyroglobulin is produced by the thyroid and may be elevated in various thyroid disorders. It is primarily used as a marker after complete thyroidectomy to detect recurrent thyroid cancer and to monitor the response to treatment in metastatic thyroid cancer.

TA-90 is a highly immunogenic subunit of a urinary tumor–associated antigen that is present in 70% of melanomas; soft-tissue sarcomas; and carcinomas of the breast, colon, and lung. Some studies have shown that TA-90 levels can accurately predict survival and the presence of subclinical disease after surgery for melanoma.

Cancer immunotherapy is the artificial stimulation of the immune system to treat cancer, improving the system’s natural ability to fight cancer. It exploits the fact that cancer cells often have molecules on their surface that can be detected by the immune system, known as tumor antigens; they are often proteins or other macromolecules (e.g. carbohydrates).

Immunotherapies can be categorized as active, passive or hybrid (active and passive). Active immunotherapy directs the immune system to attack tumor cells by targeting tumor antigens. Passive immunotherapies enhance existing anti-tumor responses and include the use of monoclonal antibodies, lymphocytes, and cytokines.

Among these, multiple antibody therapies are approved in various jurisdictions to treat a wide range of cancers. Antibodies are proteins produced by the immune system that bind to a target antigen on the cell surface. The immune system normally uses them to fight pathogens. Each antibody is specific to one or a few proteins. Those that bind to tumor antigens treat cancer. Cell surface receptors are common targets for antibody therapies and include CD20, CD274, and CD279. Once bound to a cancer antigen, antibodies can induce antibody-dependent cell-mediated cytotoxicity, activate the complement system, or prevent a receptor from interacting with its ligand, all of which can lead to cell death. Approved antibodies include alemtuzumab, rituximab, ipilimumab, nivolumab, and ofatumumab. 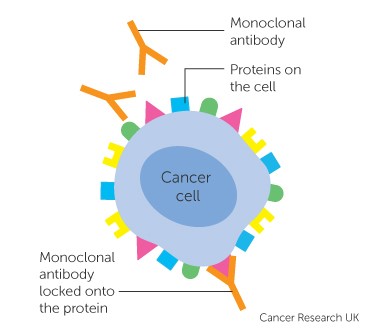 Active cellular therapies usually involve the removal of immune cells from the blood or from a tumor. Those specific for the tumor are grown in culture and returned to the patient where they attack the tumor; alternatively, immune cells can be genetically engineered to express a tumor-specific receptor, cultured and returned to the patient. Cell types that can be used in this way are natural killer (NK) cells, lymphokine-activated killer cells, cytotoxic T cells, and dendritic cells. 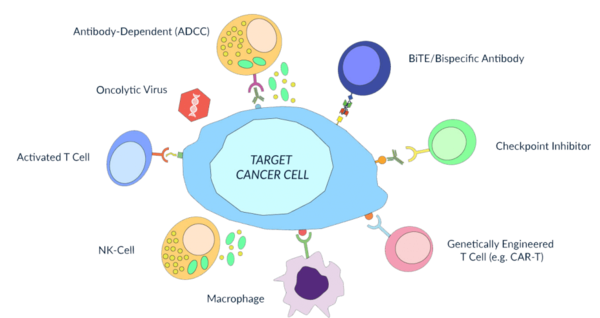