Checkpoint inhibitors prevent T-cells from recognizing cancer as a friend

Immune system uses “checkpoints” – molecules on certain immune cells that need to be activated (or inactivated) to start an immune response.

Cancer cells sometimes find ways to use these checkpoints to avoid being attacked by the immune system. They can hide by fooling immune cells into thinking they are not foreign at all. To determine friend or foe, immune cells check for a protein. If they find it on cancer cells, they appear as friends.

Drugs that target these checkpoints “checkpoints inhibitors” hold a lot of promise as cancer treatments. They do just what the name suggests –they block the checkpoint that looks for friend or foe. Seeing no friend because they are blocked, immune cells mount a defense.

Immune checkpoint inhibitors are monoclonal antibodies that block proteins, called “checkpoints,” expressed by tumor cells to inhibit the immune response. The development of this therapy for hematologic cancers has lagged behind that of solid tumors, but new data at the 2015 ASH annual meeting suggest the promise may be similar. 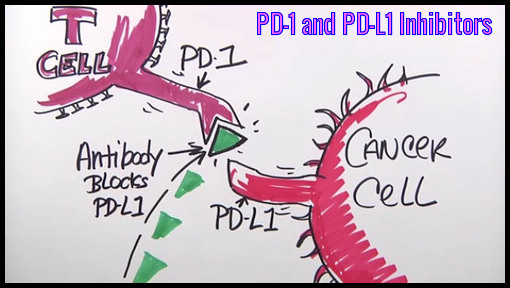 Checkpoint inhibitors block normal proteins on cancer cells, or the proteins on the T cells that respond to them

Drugs that target The programmed cell death-1 (PD-1) receptor or one of its ligands, (PD-L1):

PD-1 is a checkpoint protein on immune T cells. It normally acts as a type of “off switch” that helps keep the T cells from attacking other cells in the body. It does this when it attaches to PD-L1, a protein on some normal (and cancer) cells. When PD-1 binds to PD-L1, it basically tells the T cell to leave the other cell alone. Some cancer cells have large amounts of PD-L1, which helps them evade immune attack.

Monoclonal antibodies that target either PD-1 or PD-L1 can boost the immune response against cancer cells and have shown a great deal of promise in treating certain cancers.

PD-1 inhibitors: Examples of drugs that target PD-1 include: 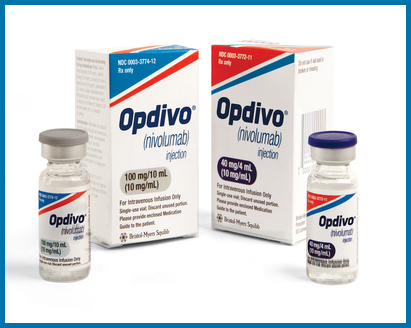 These drugs have been shown to be helpful in treating several types of cancer, including metastatic melanoma, non-small cell lung cancer, advanced renal cell carcinoma, head and neck cancers, and Hodgkin lymphoma. They are also being studied for use against many other types of cancer.

PD-L1 inhibitors: An example of a drug that targets PD-L1 is: 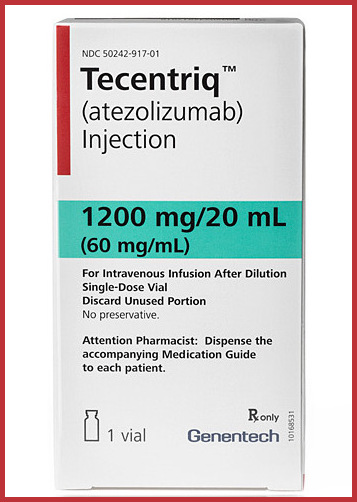 This drug can be used to treat bladder cancer, and is also being studied for use against other types of cancer.

One concern with all of these drugs is that they can allow the immune system to attack some normal organs in the body, which can lead to serious side effects in some people.

Common immune-related adverse events of these drugs can include fatigue, cough, nausea, loss of appetite, skin rash, and itching. Less often they can cause more serious problems in the lungs, intestines, liver, kidneys, endocrine glands, or other organs.

Many other drugs that target either PD-1 or PD-L1 are now being tested in clinical trials as well, both alone and combined with other drugs.

CTLA-4 is another protein on some T cells that acts as a type of “off switch” to keep the immune system in check. 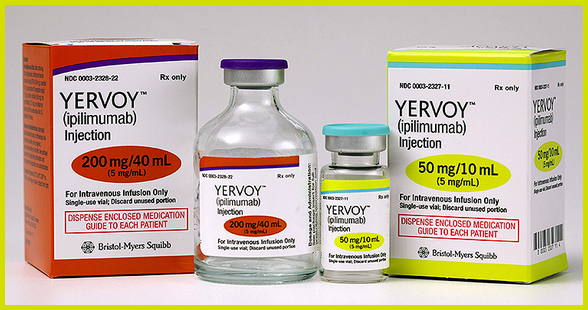 Ipilimumab (Yervoy) is a monoclonal antibody that attaches to CTLA-4 and stops it from working. This can boost the body’s immune response against cancer cells.

This drug is used to treat metastatic melanoma. It is also being studied for use against other cancers.

Because ipilimumab affects the immune system, it can sometimes cause serious or even life-threatening side effects. In fact, compared to drugs that target PD-1 or PD-L1, serious side effects seem to be more likely with ipilimumab.

Immune checkpoint blockade using inhibitors of cytotoxic T-lymphocyte-associated antigen 4 (CTLA-4) and programmed cell death-1 (PD-1) has shown clinically significant antitumor response and has been approved for the treatment of malignant melanoma and squamous non-small cell lung cancer (NSCLC). These immunotherapies are associated with unique set of toxicities termed immune-related adverse events (irAEs) that are very different from toxicities observed with conventional cytotoxic chemotherapy. Prompt recognition and initiation of appropriate management, usually in the form of immunosuppression, usually results in complete reversibility, but failing to do so can lead to severe toxicity or even death. Clinical algorithms describing the management of common irAEs have been published based on clinical trial information and experience in metastatic melanoma with ipilimumab, a human IgG1 monoclonal antibody that binds to CTLA-4 and blocks T cell inhibition. The most common irAEs reported with ipilimumab are dermatologic toxicity, diarrhea/colitis, hepatotoxicity, and endocrinopathies, although other sites can also be affected. Similar irAEs have been observed with agents targeting PD-1. Nivolumab and pembrolizumab are humanized monoclonal antibodies that bind to PD-1 and prevent T cell inactivation. Ipilimumab, pembrolizumab, and nivolumab are approved by the Food and Drug Administration (FDA) for the treatment of advanced melanoma; nivolumab was also recently approved for metastatic squamous NSCLC.

Temporary immunosuppression with corticosteroids, tumor necrosis factor-alpha antagonists, mycophenolate mofetil, or other agents can be an effective treatment for anti-CTLA-4 and anti-PD-1/PD-L1 immune-related adverse events.