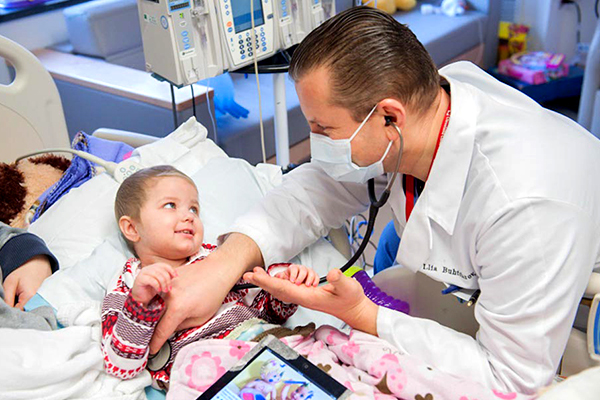 Pediatric hematology has emerged as a specialized science with age-specific reference ranges that correlate with the hematopoietic, immunologic and chemical changes in a developing child. A newborn represents the culmination of developmental events from conception and implantation through organogenesis. The embryo requires red cells for the transport of maternal oxygen to permit this growth and development. Birth brings dramatic changes in circulation and oxygenation, which affects hematopoiesis, as the newborn makes the transition to a separate biological existence.

During embryogenesis, hematopoiesis occurs in distinct sites, including the extraembryonic yolk sac, the fetal liver, and the preterm bone marrow. Erythropoiesis is established soon after implantation of the blastocyst, with primitive erythroid cells appearing in yolk sac blood islands by day 18 of gestation.

Hematopoietically active bone marrow is referred to as red marrow, as opposed to inactive yellow (fatty) marrow. At the time of birth, the bone marrow is fully active and extremely cellular, with all hematopoietic cell lineages undergoing cellular differentiation and amplification. In addition to the mature cells in fetal blood, there are significant numbers of circulating progenitor cells in cord blood.

Dramatic changes occur in the blood and bone marrow of the newborn infant during the first hours and days after birth and there are rapid fluctuations in the quantities of all hematologic elements. The values of most of the hematological parameters studied were highest especially hemoglobin concentration, packed cell volume, reticulocyte count and red cell indices on the first day of life and thereafter declined. Factors contributing to the decline in hematological parameters in the newborn are due to decrease in blood erythropoietin concentration soon after birth, reducing the erythropoietic rate. Also, transient hemolysis is high during the first days or week after birth. Significant hematologic differences are seen between term and preterm infants and among newborns, infants, young children, and older children.

Neonatal hematologic values are affected by the gestational age of the infant, the age in hours after delivery, the presence of illness, and the level of support required. Other important variables to be considered when evaluating laboratory data include the site of sampling and technique (capillary versus venous puncture, warm or unwarmed extremity), the timing of sampling, and conditions such as the course of labor and the treatment of the umbilical vessels. The presence of fetal hemoglobin (Hb F), bilirubin, and lipids in newborns can also interfere with hematology laboratory testing. As with all laboratory testing, each laboratory should establish reference intervals based on its instrumentation, methods, and patient population.

The concentration of hemoglobin fluctuates dramatically in the weeks and months after birth as a result of physiologic changes, and various factors must be considered when analyzing pediatric hematologic values. The site of sampling, gestational age, and the time interval between delivery and clamping of the umbilical cord can influence the hemoglobin level in newborn infants. In addition, there are significant differences between capillary and venous blood hemoglobin levels. Capillary samples in newborns generally have a higher hemoglobin concentration than venous samples, which can be attributed to circulatory factors. Racial differences must also be considered when evaluating hemoglobin levels in children. African American children have hemoglobin levels averaging 0.5 g/dL lower than those in white children. 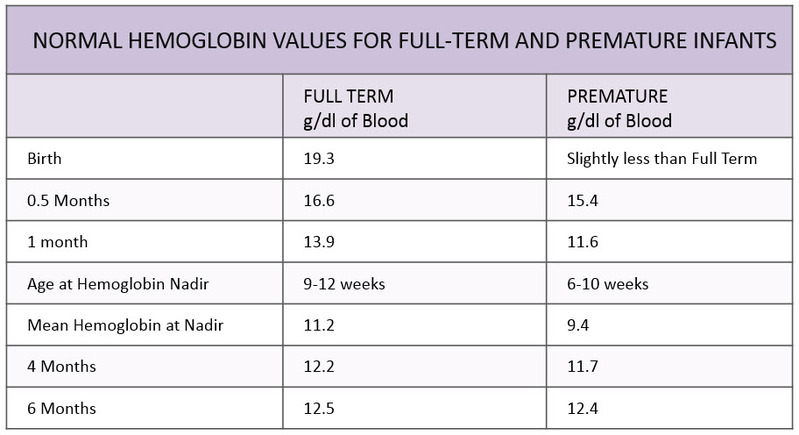 Hemoglobin synthesis results from an orderly evolution of a series of embryonic, fetal, and adult hemoglobins. At birth, Hb F constitutes 70% to 80% of the total hemoglobin. Hb F declines from 90% to 95% at 30 weeks’ gestation to approximately 7% at 12 weeks after birth and stabilizes at 3.2 ± 2.1% at 16 to 20 weeks after birth. The switch from Hb F to Hb A is genetically controlled and determined by gestational age; it does not appear to be influenced by the age at which birth occurs.

Early normoblasts are megaloblastic, hypochromic, and irregularly shaped. During hepatic hematopoiesis, normoblasts are smaller than the megaloblasts of the yolk sac but are still macrocytic. Erythrocytes remain macrocytic from the first 11 weeks of gestation until day 5 of postnatal life. 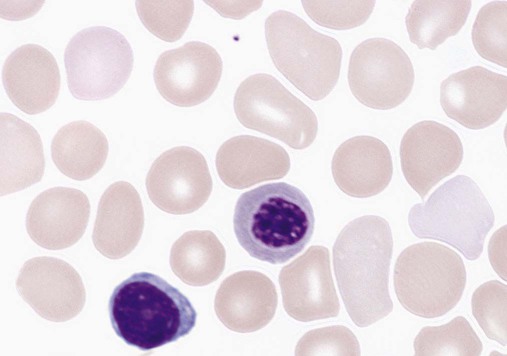 The macrocytic RBC morphology gradually changes to the characteristic normocytic, normochromic morphology. Orthochromic normoblasts frequently are observed in the full-term infant on the first day of life but disappear within postnatal days 3 to 5. These nucleated RBCs (NRBCs) may persist longer than a week in immature infants. The average number of NRBCs ranges from 3 to 10 per 100 white blood cells (WBCs) in a normal full-term infant to 25 NRBCs per 100 WBCs in a premature infant. The presence of NRBCs for more than 5 days suggests hemolysis, hypoxic stress, or acute infection. 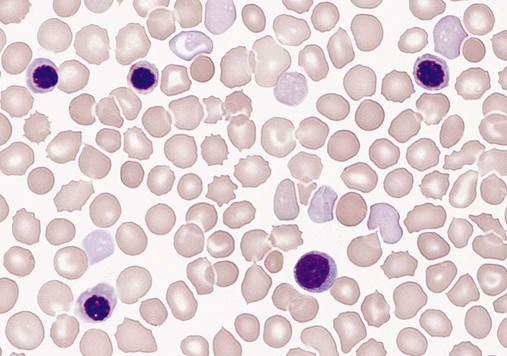 The erythrocytes of newborns show additional morphologic differences. The number of biconcave discs relative to stomatocytes is reduced in neonates (43% discs, 40% stomatocytes) compared with adults (78% discs, 18% stomatocytes). In addition, increased numbers of pitted cells, echinocytes, spherocytes, and other abnormally shaped erythrocytes are seen in neonates. The number of these “dysmorphic” cells is even higher in premature infants. Zipursky et al found 40% discs, 30% stomatocytes, and 27% additional poikilocytes in premature infants.

Apparent reticulocytosis exists during gestation, decreasing from 90% reticulocytes at 12 weeks’ gestation, to 15% at 6 months’ gestation, and ultimately to 4% to 6% at birth. Reticulocytosis persists for about 3 days after birth, then declines abruptly to 0.8% reticulocytes on postnatal day 4 to 7. At 2 months, the number of reticulocytes increases slightly, followed by a slight decline from 3 months to 2 years, when adult levels of 0.5% to 1.5% are attained. The reticulocyte count of premature infants is typically higher than that of term infants; however, the count can vary dramatically depending upon how ill the newborn is. Significant polychromasia seen on a Wright-stained blood film is indicative of postnatal reticulocytosis

In summary, hemopoiesis mainly occurs in the liver of the fetus. After birth and throughout life, hemopoiesis occurs in the bone marrow. In infants and the growing child, this occurs in all bones of the skeleton. An understanding of the normal cytology is essential in order to allow for the identification of abnormalities on the blood film. Red cells are the most numerous cell type encountered in the blood film. In the pediatric film, normal red cells are the size of the lymphocyte nucleus with a diameter of 7–9µm and a mean corpuscular volume (MCV) of 75–90 fL. They should be round in shape with a smooth contour appearing as a biconcave disc. Approximately, one-third of the cell should have a central pallor. The neonatal blood film differs from the pediatric blood film. It is not uncommon to see burr cells (echinocytes), occasional nucleated red blood cells (RBC), target cells, fragmented red cells, and some spherocytes. Neonates typically have an elevated MCV and red cells are therefore macrocytic. Nucleated red cells or normoblasts are immature red cells with a retained nucleus. They are usually found only in the circulating blood of the fetus and the newborn infant. Post infancy, their presence in the peripheral blood is indicative of disorder in blood production. Nucleated red blood cells are immature cells, they do not enter the peripheral blood under normal circumstance. They are often seen in the peripheral blood in leukoerythroblastic anemia, hemolysis, hypoxia, and marrow infiltration.

White blood cells can be divided into the myeloid/monocytic cells (neutrophils, eosinophils, basophils, and monocytes) and lymphocytes. Segmented neutrophils are the predominant white cells in the peripheral blood. The total white cell count and the neutrophil, monocyte and lymphocyte counts are often much higher in the neonate than the older child. In addition, it is important to remember that the automated lymphocyte count may be
falsely elevated due to the presence of nucleated red blood cells.

Platelets are small, non-nucleated cells. They normally measure 1.5–3 µm in diameter. They are derived from the cytoplasmic fragments of megakaryocytes. The platelet count usually ranges from 150 to 400 × 109/L for full-term and preterm infants, comparable to adult values. Platelet counts generally increase in both term and preterm infants in the first few months of life, as evidenced by increased mean platelet volume in the first month of life. Thrombocytopenia of fewer than 100 × 109 platelets/L may be seen in high-risk infants with sepsis or respiratory distress and neonates with trisomy syndromes, and investigation should be undertaken for underlying pathology. Platelets of a newborn infant show great variation in size and shape.

The physiology of the hemostatic system in infants and children is different from that in adults. The vitamin K–dependent coagulation factors (factors II, VII, IX, and X) are at about 30% of adult values at birth; they reach adult values after 2 to 6 months, although the mean values remain lower in children than in adults. Levels of factor XI, factor XII, prekallikrein, and high-molecular-weight kininogen are between 35% and 55% of adult values at birth, reaching adult values after 4 to 6 months. In contrast, the levels of fibrinogen, factor VIII, and von Willebrand factor are similar to adult values throughout childhood. Factor V decreases during childhood, with lower levels during the teen years as compared with adults. The physiologic anticoagulants and inhibitors of coagulation—protein C, protein S, antithrombin, and a disintegrin-like and metalloprotease domain with thrombospondin type 1 motifs 13 (ADAMTS 13)—are reduced to about 30% to 40% at birth. Antithrombin reaches adult values by 3 months, whereas protein C does not normalize until after 6 months. In the fibrinolytic system, levels of plasminogen and α2-antiplasmin are similar to adult levels at birth, whereas levels of tissue plasminogen activator are low and levels of plasminogen activator inhibitor (PAI) are increased. The hemostatic components are not only changing in concentration over the first few weeks to months of life, but their values are also dependent upon the gestational age of the child, and premature infants have different values at birth than term infants. 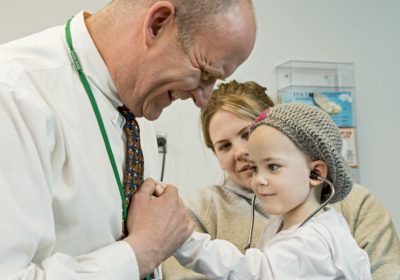