Iron deficiency anemia is the most common type of anemia, and it occurs when your body doesn’t have enough iron. Your body needs iron to make hemoglobin. When there isn’t enough iron in your bloodstream, the rest of your body can’t get the amount of oxygen it needs.

Iron is a mineral. Most of the iron in the body is found in the hemoglobin of red blood cells and in the myoglobin of muscle cells. Iron is needed for transporting oxygen and carbon dioxide. It also has other important roles in the body. In people with iron deficiency anemia, the red blood cells can’t carry enough oxygen to the body because they don’t have enough iron. People with this condition often feel very tired.

What is the difference between ferritin and iron?

Ferritin is a good indicator of how much iron is stored within our body. For example, if a blood test reveals ferritin levels are low, this could be a sign of iron deficiency anemia. Approximately one-quarter of the total iron in the body is stored as ferritin. Ferritin has a vital function in the absorption, storage, and release of iron. It has a large iron core which can store up to 4000 iron atoms. These atoms are protected by the protein coat of the ferritin protein, called apoferritin. Most ferritin is found in the liver but it can also be present in the spleen, bone marrow, and the muscles.

Normal ferritin levels are between 13 and 150 µg/L, although this can change depending on the laboratory testing the sample.

It is important to note that ferritin levels can be raised in certain conditions, including:

In these instances, the increased ferritin levels are not a reflection of the body’s iron stores.

Transferrin is the main protein in the blood that binds to iron and transports it throughout the body. A transferrin test directly measures the level in the blood. Alternatively, transferrin may be measured indirectly (or converted by calculation) so that its level is expressed as the amount of iron it is capable of binding. This is called the total iron-binding capacity (TIBC).

Over 10% of Western urban populations are iron deficient though not all are anemic. In many other parts of the world, the incidence is still higher. Iron deficiency anemia is particularly common in women of childbearing age.

Foods rich in iron include:

This may be due to heavy periods or bleeding from the bowel or urinary system. 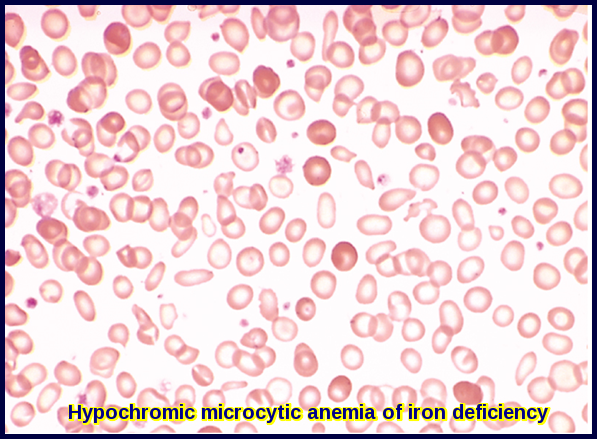 Note the small red cells containing a narrow rim of hemoglobin at the periphery. Compare to the scattered, fully hemoglobinized cells derived from a recent blood transfusion given to the patient.

Once iron deficiency is diagnosed the underlying cause MUST BE ESTABLISHED by thorough history taking, physical examination, and relevant further investigations like upper and lower Gastrointestinal endoscopy (OGD & Colonoscopy) if GI blood loss or Coeliac disease are suspected; ultrasound scan of the uterus to out rule fibroids if menorrhagia is the likely cause of the iron deficiency anemia is also warranted.

IT IS NOT ENOUGH TO REPLACE THE DEFICIENT IRON … IN ALL CASES, THE CAUSE OF THE IRON DEFICIENCY SHOULD BE IDENTIFIED! IRON DEFICIENCY ANEMIA COULD BE THE FIRST PRESENTING SIGN OF BOWEL CANCER IN THE ELDERLY!

Oral iron is given to correct the anemia and then replete the body stores (3-6 months).

Iron is best absorbed on an empty stomach (usually if taken 1 hour before or 2 hours after meals). If stomach upset occurs, you may take it with food.

Ferrous sulfate 200mg three times daily is cheap and effective though the dose must be reduced in patients who experience side-effects!

Oral iron may cause Gastrointestinal disturbances e.g. constipation, diarrhea, stomach discomfort, and feeling sick. Some patients are intolerant of oral iron and parenteral iron may be considered if the anemia is severe.

For patients who have difficulty tolerating oral iron supplements, administer smaller, more frequent doses; start with a lower dose and increase slowly to the target dose; try a different form or preparation, or take with or after meals or at bedtime.

Iron-drug interactions of clinical significance may occur in many patients and involve a large number of therapies. Concurrent ingestion of iron causes marked decreases in the bioavailability of a number of drugs e.g. tetracycline, tetracycline derivatives (doxycycline, methacycline, and oxytetracycline), penicillamine, methyldopa, levodopa, carbidopa, and ciprofloxacin. The major mechanism of these drug interactions is the formation of iron-drug complexes (chelation or binding of iron by the involved drug). A large number of other important and commonly used drugs such as thyroxine, captopril, and folic acid have been demonstrated to form stable complexes with iron.

This should only be used if oral iron cannot be tolerated or if negative iron balance persists.

There are many available preparations that can be given as an intravenous iron infusion in the hospital like Injectafer, CosmoFer, Monofer, and Venofer. Parenteral iron should only be administered under strict medical supervision.

What is the difference between ferritin and iron?https://www.forthwithlife.co.uk/blog/whats-the-difference-between-ferritin-and-iron/