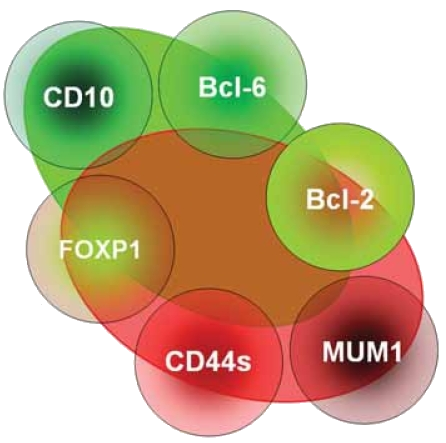 CD is an abbreviation for “cluster of differentiation”. CD molecules are cell surface markers which are very useful for the identification and characterization of leukocytes and the different subpopulations of leukocytes. The HLDA (Human Leukocyte Differentiation Antigens) workshop, which started in 1982, developed the CD nomenclature and has maintained the list of CD Markers ever since. The initial idea behind the CD nomenclature was the classification of many different monoclonal antibodies against cell surface molecules of leukocytes which had been generated by different laboratories around the world. The number of CD markers has grown constantly and was expanded to other cell types. Today there are more than 320 CD clusters described in humans. For more information and a comprehensive list of CD markers please visit this link.

The most common leukemia biomarkers are CD (cluster of differentiation) markers, an extremely diverse series of membrane proteins predominantly expressed on the leukocyte surface. CD markers are mostly useful for classifying white blood cells (WBC) and especially important for the diagnosis of lymphomas and leukemias. 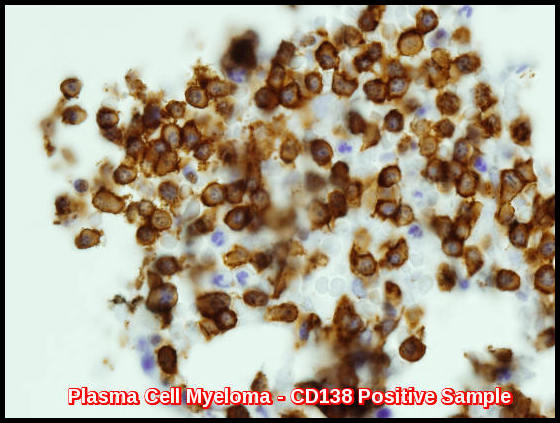 CD marker-specific antibodies have been widely used for cell sorting, identification, and blood cancer diagnosis. In addition, CD markers have become significantly important for cancer treatment. Some therapeutic antibody drugs have been designed to target cells that have a particular type of CD marker (e.g, rituximab to CD20 for lymphomas and leukemia treatment; alemtuzumab to CD52 for chronic lymphocytic leukemia and T-cell lymphoma treatment).

What is Flow Cytometry?

Sometimes, you just can’t tell what kind of tumor you’re looking at under the microscope. In acute leukemia, for example, some cases have distinctive features (like Auer rods) that tell you what kind of leukemia it is – but other cases have no clues.

In cases where clues are minimal – particularly in hematopoietic or lymphoid neoplasms – you can do flow cytometry to see what markers are on the surface of the cells. This is a test that uses fluorescent antibodies to tag molecules on the surface of cells. 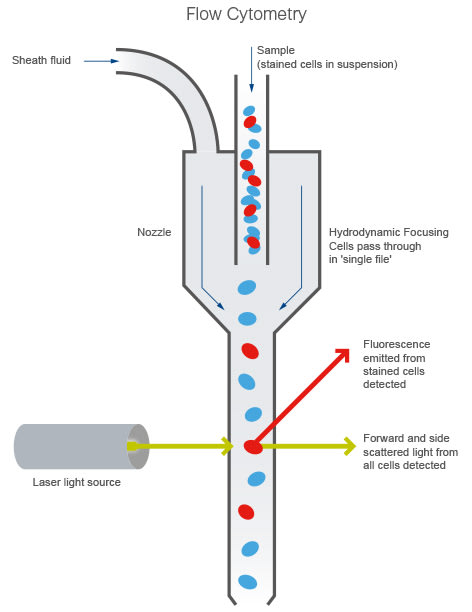 In a flow cytometer: 1-Sample cells are passed through a narrow channel one at a time. 2-Light is used to illuminate the cells in the channel. 3-A series of sensors detect the types of light that are refracted or emitted from the cells. 4-Data acquired by the sensors is compiled and integrated to build a comprehensive picture of the sample.

The flow cytometer, which is super fancy, has a teeny tube that allows the cells to flow one at a time past a laser beam (check out the diagram above). In addition to telling what kinds of markers a cell has (by whether it fluoresces with the antibodies you used), you can also sort cells by size and complexity. It’s an incredibly useful technique that’s used for lots of different purposes, one of the most common (in hospital practice, anyway) being to find out what markers are on the surface of cells. In a bland-looking leukemia case, for example, if you did flow cytometry and saw that the cells expressed CD 13 and CD 33, you’d know the cells were myeloid, and that it was most likely an acute myeloid leukemia. 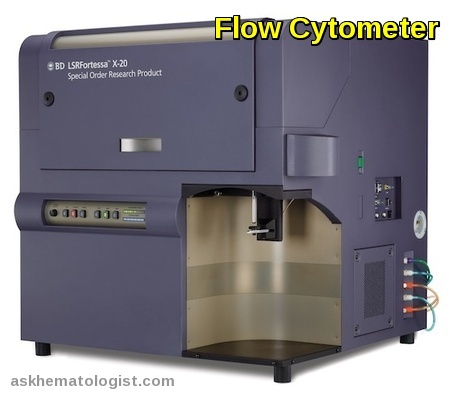 The great advantage of flow cytometry is that it allows for the simultaneous detection of several markers on a single cell at the very same time. With a modern flow cytometer, 8-10 different colors can easily be measured in one sample, the most advanced cytometers can even measure up to 18 channels at once.

It might be a good idea to know some of these markers. You already know a few: CD3, for example, is a CD marker that’s on the surface of all mature T cells, CD4 is on helper T cells and CD8 is on cytotoxic T cells. There are over 350 CD markers, so obviously you don’t have to know every single one. But some of them are used so commonly that it would probably benefit you to know what they are and how they are used.

Here is a list of commonly-used markers. Some markers are used in more than one instance (for example, CD15 is present on both Reed-Sternberg cells and neutrophils). Note that they are listed, for the most part, in numerical order. Note also that sometimes it’s the absence of a marker that helps you with the diagnosis. For example, if you have a lymphoid neoplasm in which the cells are small and mature looking, and by flow those cells are CD5 positive but CD23 negative, you’d be able to rule out chronic lymphocytic leukemia which is CD5 and CD23 positive and lean towards a diagnosis of mantle cell lymphoma.

Flow cytometry data analysis is fundamentally based upon the principle of gating. Gates and regions are placed around populations of cells with common characteristics, usually forward scatter (FSC), side scatter (SSC) and marker expression, to investigate and to quantify these populations of interest. Here we will show what the common flow cytometry graph outputs look like and how in a few simple steps you can identify different cell populations that have been stained with antibodies conjugated to fluorophores.

The first step in gating is often distinguishing populations of cells based on their forward and side scatter properties. Forward and side scatter give an estimation of the size and granularity of the cells respectively, although this can depend on several factors such as the sample, the wavelength of the laser, the collection angle and the refractive index of the sample and the sheath fluid.

Distinguishing populations of cells can be relatively straightforward for cell lines where there is only one type of cell, but it can be more complex for samples where there are multiple cell types. As can be seen in the density plots in the figure below, red cell lysed whole blood has several distinct populations. The red/yellow/green/blue hot spots indicate increasing numbers of events resulting from discrete populations of cells. The light scatter patterns of granulocytes, monocytes and lymphocytes allow them to be distinguished from cellular debris and dead cells. Debris and dead cells often have a lower level of forward scatter and are found at the bottom left corner of the density plot.

The forward scatter threshold can be increased to avoid collecting these events, or they can be removed by gating on the populations of interest (Figure A). Data can also be plotted as a combination of fluorescence and forward or side scatter as seen with CD45 Pacific Blue in Figure B. Forward and side scatter gating is often used to remove dead cells which have increased autofluorescence and non-specific binding of antibodies, however, including a viability dye is a much more reliable method.

Kristine Krafts, M.D. University of Minnesota School of Medicine and School of Dentistry. A short list of CD markers. https://www.pathologystudent.com/a-short-list-of-cd-markers/ 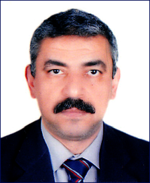