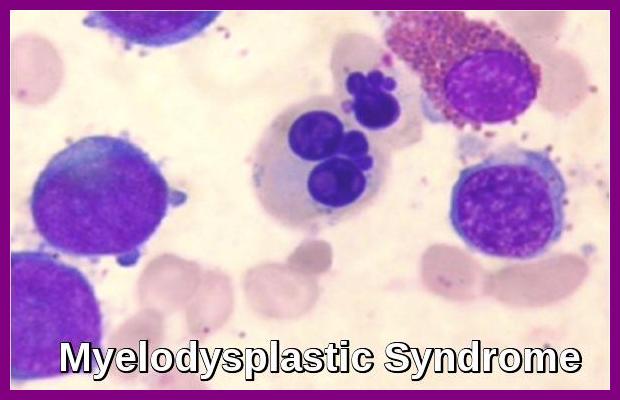 Myelodysplastic Syndrome (MDS) is a group of diverse bone marrow disorders sometimes referred to as preleukemia, in which the bone marrow does not produce enough healthy blood cells.

MDS affects hematopoiesis at the stem cell level, as indicated by cytogenetic abnormalities, molecular mutations, and morphologic and physiologic abnormalities in maturation and differentiation of one or more of the hematopoietic cell lines.

Myelodysplastic syndrome is often referred to as a “bone marrow failure disorder”. Failure of the bone marrow to produce mature healthy cells is a gradual process, and therefore MDS is not necessarily a terminal disease.

MDS may involve one, two, or all three cell lineages—erythrocytic, granulocytic, megakaryocytic—depending on the subtype and stage of the disease.

The formal definition of dysplasia is the abnormal shape and appearance, or morphology, of a cell.

MDS is primarily a disease of the elderly (most patients are older than age 65), but MDS can affect younger patients as well.

Myelodysplastic syndrome (MDS) is characterized by one or more peripheral blood cytopenias, dysplastic hematopoietic progenitors, a hypercellular bone marrow, and a high risk of conversion to acute myeloid leukemia (AML).

In MDS, stem cells may not mature and may accumulate in the bone marrow or they may have a shortened life span, resulting in fewer than normal mature blood cells in the circulation. Bone marrow cells display aberrant morphology and maturation (dysmyelopoiesis), resulting in ineffective hematopoiesis.

Cytopenias, are a hallmark feature of MDS and are responsible for some of the symptoms that MDS patients experience — infection, anemia, spontaneous bleeding, or easy bruising. In the early stages of MDS, the main cause of cytopenias is increased apoptosis (programmed cell death). As the disease progresses and converts into leukemia, further gene mutation occurs, and a proliferation of leukemic cells overwhelms the healthy marrow.

With a few exceptions, the exact causes of MDS are unknown.

Some evidence suggests that certain people are born with a tendency to develop MDS. This tendency can be thought of as a switch that is triggered by an external factor. If the external factor cannot be identified, then the disease is referred to as “primary MDS”.

Radiation and chemotherapy for cancer are among the known triggers for the development of MDS. Patients who take chemotherapy drugs or who receive radiation therapy for potentially curable cancers, such as breast or testicular cancers, Hodgkin’s disease and non-Hodgkin’s lymphoma, are at risk of developing MDS for up to 10 years following treatment.

Myelodysplastic syndrome that develops after use of cancer chemotherapy or radiation is called “secondary MDS” and is usually associated with multiple chromosome abnormalities in cells in the bone marrow. This type of MDS often develops rapidly into AML.

Long term exposure to certain environmental or industrial chemicals, such as benzene, can also trigger MDS.

While alcohol consumed on a daily basis may lower red blood cell and platelet counts, alcohol does not cause MDS.

MDS is not inherited. In fact, it is a very rare occasion when family members, including siblings, are diagnosed with MDS.

Cytogenetically, patients with MDS or AML fall into three groups:

Symptoms tend to reflect the most affected cell line and may include pallor, weakness, and fatigue (anemia); fever and infections (neutropenia); and increased bruising, petechiae, epistaxis, and mucosal bleeding (thrombocytopenia).

In addition to reduced numbers of blood cells, the mature blood cells circulating in the blood may not function properly because of dysplasia.

Extramedullary hematopoiesis may occur, leading to hepatomegaly and splenomegaly.

Myelofibrosis is occasionally present at diagnosis or may develop during the course of MDS.

Symptoms may also be referable to other underlying disorders; e.g. in elderly patients with preexisting cardiovascular disorders, anemia from MDS may exacerbate anginal pain.

The presence of dysplastic changes in the peripheral blood smear and trilineage dysplasia and hypercellular marrow in the absence of vitamin deficiency is diagnostic of MDS. The presence of typical chromosomal abnormalities supports the diagnosis and contributes to determining the prognosis of MDS.

Myelodysplastic syndrome is suspected in patients (especially the elderly) with refractory anemia, leucopenia, or thrombocytopenia. Cytopenias secondary to congenital disorders, vitamin deficiencies, or drug adverse effects must be ruled out.

Anemia is the most common feature, associated usually with macrocytosis and anisocytosis. With automatic cell counters, these changes are indicated by an increased MCV and RBC distribution width. Punctate basophilia is observed in RBCs.

Some degree of thrombocytopenia is usual; on peripheral smear, platelets vary in size, and some appear hypogranular. Abnormalities such as giant hypogranular platelets and megakaryocyte fragments are present.

The WBC count may be normal, increased, or decreased. Neutrophil cytoplasmic granularity is abnormal, with anisocytosis and variable numbers of granules. Granulation abnormalities vary from an absence of granules to abnormal distribution inside the cytoplasm (Döhle bodies).

Eosinophils also may have abnormal granularity. Pseudo Pelger-Huët cells (hyposegmented neutrophils) may be seen. Monocytosis is characteristic of the chronic myelomonocytic leukemia (CMML) subgroup, and immature myeloid cells may occur in the less well differentiated subgroups.

The cytogenetic pattern is usually abnormal, with one or more clonal cytogenetic abnormalities often involving chromosomes 5 or 7.

In most cases, bone marrow changes include hypercellularity with trilineage dysplastic changes. A small number of patients may have a hypocellular marrow. This often overlaps with aplastic anemia. Increased marrow fibrosis may be confused with other myeloproliferative disorders. Dysplastic changes in RBC lineage (dyserythropoiesis) are characteristic. In the absence of vitamin B12 or folate deficiencies, the bone marrow usually exhibits asynchronous maturation of nuclei and cytoplasm similar to that described in megaloblastic anemias. 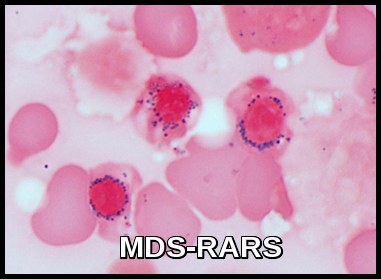 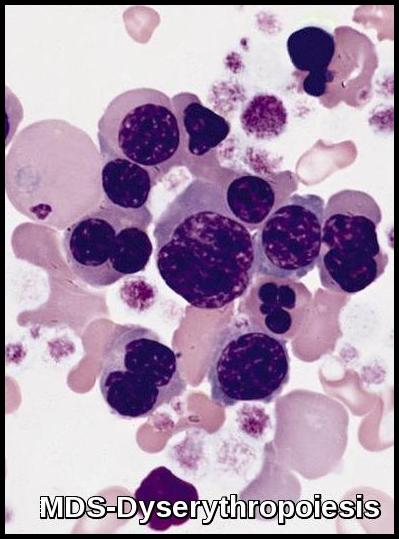 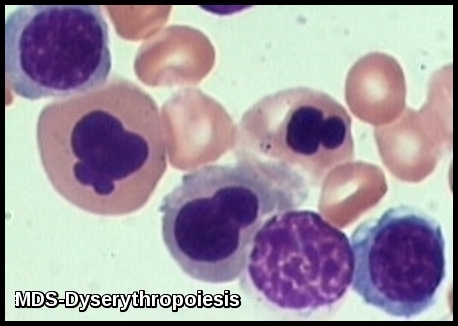 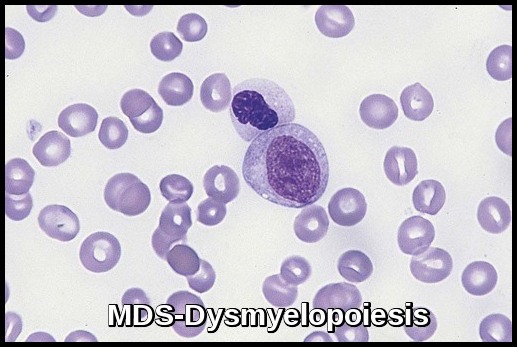 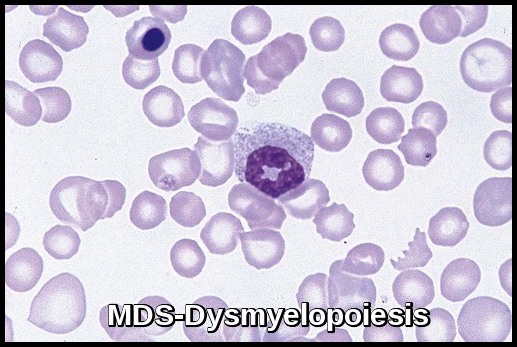 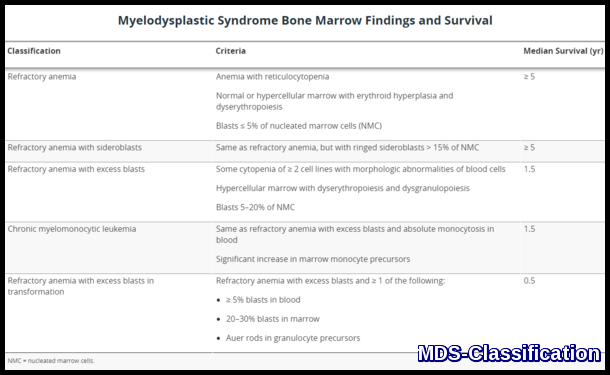 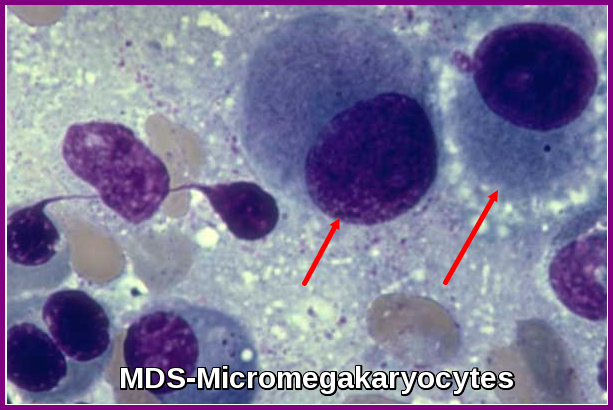 Cytogenetic studies of the bone marrow cells indicate mutations into clonal cell lines, with abnormal chromosomes in 48-64% in different series. With higher-resolution techniques (e.g. FISH), some practitioners claim a 79% rate of chromosomal abnormalities in patients with primary MDS.

Chromosomal abnormalities are clonal and include 5q-, monosomy 7 (-7) or 7q-, trisomy 8 (+8), and numerous other less frequent abnormalities. Multiple combinations may be present; this indicates a very poor prognosis. A single abnormality, except those involving chromosome 7, usually indicates a good prognosis and survival.

Deletion 5q is a rare form of Myelodysplastic Syndrome (MDS). For many people, it can remain stable for many years causing few symptoms. For others, it may progress rapidly into a different subtype of MDS or transform into acute leukemia. Refractory anemia is very common in Del 5(q) MDS.

Chronic myelomonocytic leukemia (CMML) is a clonal hematopoietic stem cell disorder with overlapping features of myelodysplastic syndromes and myeloproliferative neoplasms, with an inherent risk for leukemic transformation (~15% over 3-5 years). Diagnosis is based on the presence of sustained (>3 months) peripheral blood monocytosis (≥1 x 109/L; monocytes ≥10%), usually with accompanying bone marrow dysplasia. Clonal cytogenetic abnormalities occur in ~ 30% of patients, while >90% have somatic gene mutations. Mutations involving TET2 (~60%), SRSF2 (~50%), ASXL1 (~40%), and the oncogenic RAS pathway (~30%) are frequent, while the presence of ASXL1 and DNMT3A mutations and the absence of TET2 mutations negatively impact overall survival. 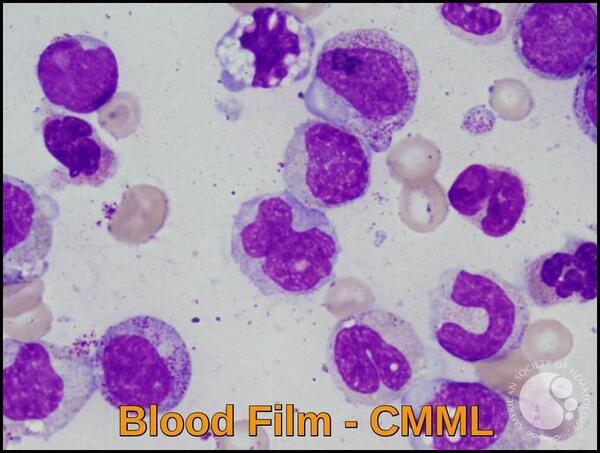 The International Prognostic Scoring System (IPSS) is a system developed for staging MDS. It was intended for use with the FAB classification system. It rates 3 factors:

1- The percentage of blasts in the bone marrow (scored on a scale from zero to 2)
2- Chromosome abnormalities (scored from zero to 1)
3- The patient’s blood counts. (scored as zero or 0.5)

Each factor is given a score, with the lowest scores having the best outlook. Then the scores for the factors are added together to make the IPSS score. The IPSS puts people with MDS into 4 groups:
An online calculator for determining an individual patient’s revised IPSS score is available on the MDS Foundation Web site.

The standard care for patients with myelodysplastic syndrome (MDS) and decreased blood counts is constantly changing.

Supportive therapy, including transfusions of the cells that are deficient (i.e. RBCs, platelets), and treatment of infections are the main components of care.

The approach to therapy is based on the International Prognostic Scoring System (IPSS) score, the patient’s age and co-morbidities, and the patient’s expectations and personal goals.

The more toxic and aggressive forms of therapy, such as stem cell transplantation and aggressive chemotherapy, are reserved for younger and fit patients with high-risk disease.

Cytotoxic chemotherapy is used in patients with MDS who have increasing myeloblasts and those who have progressed to acute leukemia. The usual combination treatment is cytarabine plus an anthracycline, which yields a limited response rate of 30-40%. Elderly patients experience high rates of morbidity and mortality with this approach and should consider treatment with the hypomethylating agent azacitidine (Vidaza), which has been shown to relieve symptoms, decrease the rate of transformation to leukemia and the need for transfusions, and probably improve survival compared with either supportive or aggressive therapy and is approved for use in MDS by the US Food and Drug Administration (FDA).

Deoxyazacitidine (Decitabine), another hypomethylating agent, is sometimes effective, even in patients who do not respond to azacitidine.

Lenalidomide (Revlimid) is active in patients with MDS categorized as low risk or intermediate risk–1 according to the International Prognostic Scoring System (IPSS).

Lenalidomide is the drug of choice in MDS with 5q deletion syndrome. In particular, patients with the karyotype characterized by deletion 5q31 show the best response. List et al reported an erythroid response in 76% of these patients, with 67% no longer requiring transfusions; 73% of their 148 patients had a cytogenetic response, 45% had a complete cytogenetic remission, and 36% achieving a normal bone marrow histologically.

In some patients, erythropoietin to support RBC needs, granulocyte colony-stimulating factor (G-CSF) to manage severe symptomatic granulocytopenia, and, when available, thrombopoietin for severe thrombocytopenia can serve as important hematopoietic support but have not increased survival.

Allogeneic stem cell transplantation is the treatment of choice for young patients, and nonablative allogeneic bone marrow transplantations are now being studied for patients > 50 years. Response of MDS to chemotherapy, typically regimens similar to those used for AML, is similar to that of AML after age and karyotype are considered.

Some cases of MDS have an autoimmune process underlying the pancytopenia and respond to immunosuppressive therapy. However, identifying these cases is problematic. A portion of these cases represent an overlap between aplastic anemia (AA), paroxysmal nocturnal hemoglobinuria (PNH), and MDS. These patients are usually younger and may have hypoplastic bone marrow with dysplasia and cytogenetic abnormalities (separate from AA). In addition, they may have a small clone of PNH cells, but these typically constitute less than 3% of cells and require a special sensitive flow cytometry to be detected.

Although treatment of symptoms improves quality of life in MDS, these measures are temporary. More long-term measures are necessary to stimulate the patient’s bone marrow production of mature blood cells.

Practitioners are encouraged to refer patients for participation in clinical trials at academic centers and the MDS Centers of Excellence.

Besa EC. Myelodysplastic syndromes (refractory anemia). A perspective of the biologic, clinical, and therapeutic issues. Med Clin North Am. 1992 May. 76(3):599-617.

Silverman LR, Demakos EP, Peterson BL, et al. Randomized controlled trial of azacitidine in patients with the myelodysplastic syndrome: a study of the cancer and leukemia group B. J Clin Oncol. 2002 May 15. 20(10):2429-40.