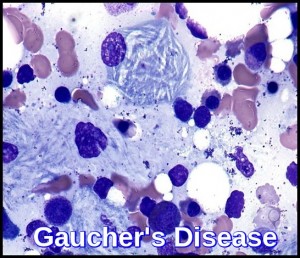 Gaucher’s Disease is an autosomal recessive condition most common in Jews.

There is β-glucocerebrosidase deficiency causing deposition of glucocerebroside and related compounds, leading to hepatosplenomegaly, CNS changes and bony infiltration.

The course of the disease is very variable.

There are 3 types, which vary in epidemiology, enzyme activity, and manifestations:

Type I (non-neuronopathic) is most common (90% of all patients). Residual enzyme activity is highest. Ashkenazi Jews are at greatest risk. Patients with type 1 disease commonly present with painless splenomegaly, anemia, or thrombocytopenia.

The blood film often shows features of hypersplenism and typical Gaucher cells are found in the bone marrow.

Diagnosis can be confirmed through measurement of glucocerebrosidase activity in WBCs. A finding of less than 15% of mean normal activity is diagnostic; carriers are detected, and types are distinguished by mutation analysis.

Treatment for types I and III include enzyme replacement with glucocerebrosidase, and sometimes miglustat, eliglustat, splenectomy, or stem cell or bone marrow transplantation; there is no treatment for type II.

The 3 FDA-approved drugs available for treating Gaucher disease include: