Acanthocytes – blood smear is taken from a patient with Abetalipoproteinemia

The formation of acanthocytes depends on the alteration of the lipid composition and fluidity of the red cell membrane.

Acanthocytosis may be inherited (autosomal recessive) in association with retinitis pigmentosa, diffuse neurological deficits, and abetalipoproteinemia.

Acanthocytes are also seen in renal failure, liver cirrhosis, microangiopathic hemolytic anemia, and as an artifact in blood stored in EDTA. 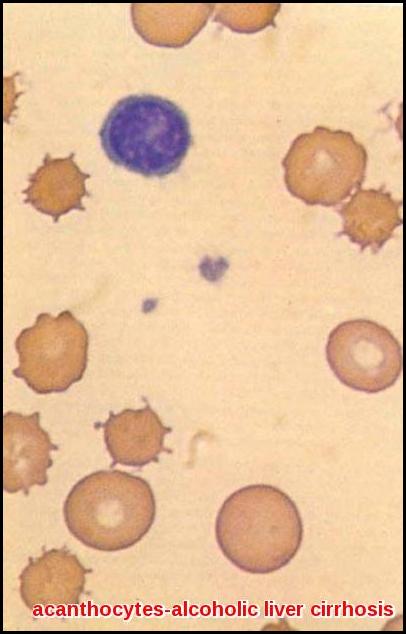 Acanthocytes should be distinguished from Echinocytes (burr cells).

Echinocytes, or burr cells, appear with multiple small projections that are uniformly distributed on the red cell surface. Echinocytes, more commonly referred to as burr cells, are reversible, meaning that this alteration can be the result of the cell’s environment, pH of the medium (including the glass slides on which blood smears are made), the metabolic state of the cell and the use of some chemical substances.

Echinocytes occur in many conditions, including malnutrition associated with mild hemolysis due to hypomagnesemia and hypophosphatemia, uremia, hemolytic anemia in long-distance runners, and pyruvate kinase deficiency. In vitro, elevated pH, blood storage, ATP depletion, calcium accumulation, and contact with glass can lead to the formation of echinocytes.