Hemophagocytic Lymphohistiocytosis (HLH) or Hemophagocytosis is a rare but potentially fatal disease of normal but overactive histiocytes and lymphocytes that commonly appears in infancy, although it has been seen in all age groups.

Hemophagocytosis involves a defect in targeted killing and the inhibitory controls of natural killer and cytotoxic T cells, resulting in excessive cytokine production and accumulation of activated T cells and macrophages in various organs. Cells in the bone marrow and/or spleen may attack RBCs, WBCs, and/or platelets.

Hemophagocytosis is diagnosed when patients fulfill at least 5 of the criteria described below or have a mutation in a known HLH-associated gene. The presence of a PRF1 gene mutation can be determined based on flow cytometry by staining perforin contained in lymphocytes.

Acquired hemophagocytosis can be associated with other disorders (e.g. leukemias, lymphomas, SLE, RA, polyarteritis nodosa, sarcoidosis, progressive systemic sclerosis, Sjögren syndrome, Kawasaki disease) and can occur in kidney or liver transplant recipients. Acquired HLH may be caused by those disorders or the immunosuppressive regimens used to treat them, and possibly by infections. Macrophage Activation Syndrome (MAS) is a life-threatening complication of rheumatic disease that, for unknown reasons, occurs much more frequently in individuals with systemic juvenile idiopathic arthritis (SJIA) and in those with adult-onset Still disease.

In both familial and acquired forms, genetic abnormalities, clinical manifestations, and outcomes tend to be similar.

Irrespective of the cause, the unrestrained immune hyperactivation leads to host tissue damage and a characteristic clinical syndrome.

The pathological hallmark of this disease is the aggressive proliferation of activated macrophages and histiocytes, which phagocytose other cells, namely RBCs, WBCs, and platelets, leading to the clinical symptoms.

The uncontrolled growth is nonmalignant and does not appear clonal in contrast to the lineage of cells in Langerhans cells histiocytosis (histiocytosis X). The spleen, lymph nodes, bone marrow, liver, skin, and membranes that surround the brain and spinal cord are preferential sites of involvement.

This disorder may be viewed as a highly stimulated, but ineffective, immune response to antigens, which results in life-threatening cytokine storm and inflammatory reaction.

HLH can be diagnosed if there is a mutation in a known causative gene or if at least 5 of 8 diagnostic criteria are met: 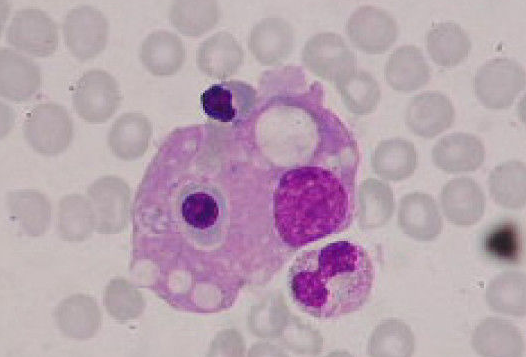 Treatment should be started if the disorder is suspected, even if not all diagnostic criteria are fulfilled.

Patients are usually treated by a pediatric hematologist and in a referral center experienced in treating patients with HLH.

Treatment depends on the presence of factors such as a family history of HLH, coexisting infections, and demonstrated immune system defects.

In 1994, as a result of an international cooperative effort, the Histiocyte Society created the first treatment protocol for patients with HLH/FHL.  This included a combination of chemotherapy, immunotherapy, and steroids, as well as antibiotics and antiviral drugs, followed by a stem-cell transplant in patients with persistent or recurring HLH or those with Familial Haemophagocytic Lymphohistiocytosis (FHL).

The HLH-2004 protocol was based on the HLH-94 protocol with minor changes such as cyclosporine, an immunosuppressant drug, being started at the onset of therapy rather than week 8.  This protocol has been widely accepted internationally and is used in numerous countries on all continents but should only be used as a research study.

Intravenous immunoglobulin (IVIG) is also used. Methotrexate and vincristine have also been used. Other medications include cytokine targeted therapy.

There are cases of secondary HLH that can resolve spontaneously or after treatment of the underlying disease, without the use of chemotherapy.  The treatment should be guided in part by the severity of the condition, as well as the cause of the disease.

FHL, however, when not treated, is usually rapidly fatal with an average historical survival of about 2 months.  The treatment included in the HLH-2004 research protocol is intended to achieve stability of the disease symptoms so that a patient can then receive a stem-cell transplant, which is necessary for a cure.

As research continues, the outcome for patients with HLH/FHL has improved greatly in recent years.  Approximately two-thirds of children with HLH who undergo transplantation can expect to be cured of their disease.  However, there are a number of complications that can occur during the process of transplant, including severe inflammatory reactions, anemia, and graft-versus-host disease.

Long-term follow-up of survivors of transplants for HLH/FHL indicates that most children return to a normal or near-normal quality of life.  The results of transplantation are generally better when the procedure is performed at a major pediatric transplant center where the doctors are familiar with this disease.  Early and accurate diagnosis is essential.

However, there is still a high rate of death, indicating the education of the medical community regarding prompt diagnosis and management of the diseases, as well as improvement in managing therapy to provide optimal outcome still requires support for clinical research of this group of disorders.