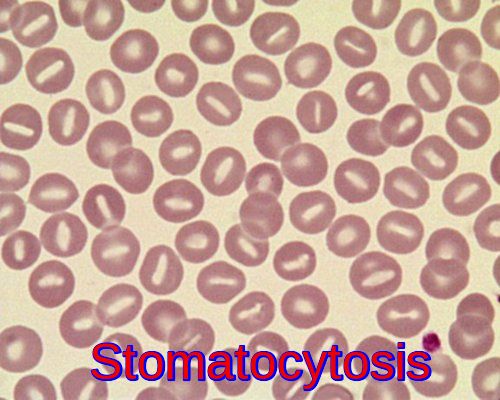 Stomatocytosis is a rare condition of RBCs in which a mouthlike or slitlike pattern replaces the normal central zone of pallor. These cells are associated with congenital and acquired hemolytic anemia. The symptoms result from the anemia.

Stomatocytes are erythrocytes with a central slit or stoma instead of a circular area of pallor when examined on dried smears; they are uniconcave rather than biconcave, giving them a bowl-like appearance. A few stomatocytes may be observed in blood smears prepared from normal individuals, as well as from patients with acute alcoholism and hepatobiliary disease. Large numbers of stomatocytes are associated with very rare hereditary disorders of red cell cation permeability leading to increased or decreased red cell water content.

Hereditary Stomatocytosis comprises two different diseases: the xerocytosis or dehydrated hereditary stomatocytosis and the overhydrated hereditary stomatocytosis. Both are genetic disorders mainly due to an abnormality of red cell membrane permeability to monovalent cations (Na+ and K+) resulting in an alteration in the red blood cell water content. The movement of divalent cations and anions is normal. Typical red blood cells are known as stomatocytes (mouth featured cells) appear in blood smear examination. The clinical manifestation can vary from asymptomatic to severe hemolytic anemia. Hereditary Stomatocytosis shows autosomal dominant inheritance and may cause severe hemolytic anemia presenting very early in life. 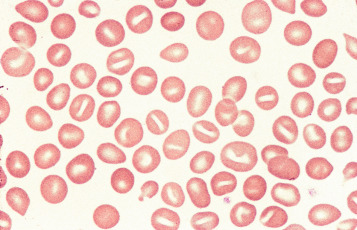 Stomatocytes have been noted in diverse acquired conditions, including neoplasms, cardiovascular and chronic liver disease, alcoholism, and therapy with drugs, some of which are known to be stomatocytogenic in vitro. In some of these conditions, the percentage of stomatocytes on the peripheral blood smear can approach 100%. However, the clinical significance of this observation is unclear because stomatocytes are absent in most patients with the conditions listed. Furthermore, some stomatocytes can be found in normal individuals (3–5%). The most consistent association is that of stomatocytosis and heavy alcohol consumption.

Splenectomy ameliorates anemia in some cases.

Acquired stomatocytosis with hemolytic anemia occurs primarily with recent excessive alcohol ingestion. Stomatocytes in the peripheral blood and hemolysis disappear within 2 weeks of alcohol withdrawal. Stomatocytosis could also be seen in thalassemia, neoplastic, cardiovascular or hepatobiliary disease including acute alcoholism and during therapy with certain drugs some of which are known to be stomatocytogenic in vitro.