The word ‘plasmapheresis’ (meaning the withdrawal of plasma) was coined by Abel in 1914 to describe a process by which whole blood is withdrawn from the body and separated into its constitutive parts, the cells being returned to the body while the plasma is retained.

Plasmapheresis is a procedure in which whole blood is taken from a person and separated into plasma and blood cells; the plasma is removed and replaced with another solution, such as saline solution, albumin, or specially prepared donor plasma; and the reconstituted solution is then returned to the patient. Plasmapheresis is used in the treatment of many different conditions, including autoimmune disorders. When the plasma is removed, it takes with it the antibodies that have been developed against self-tissue in an attempt to reduce the attack on the patient’s own body. Plasmapheresis carries with it the same risks as any intravenous procedure but is otherwise generally safe.

In other words, plasmapheresis is a process that filters the blood and removes harmful antibodies. It is a procedure done similarly to dialysis; however, it specifically removes antibodies from the plasma portion of the blood. Antibodies are part of the body’s natural defense system which help destroy things that are not a natural part of our own bodies, like germs or bacteria.

Pheresis, or apheresis, describes any process that removes the blood, filters and retains elements of it, then returns the blood to the body. Platelets, red blood cells, white blood cells, or plasma may be separated.

The procedure is performed using a machine that removes small amounts of blood at a time. 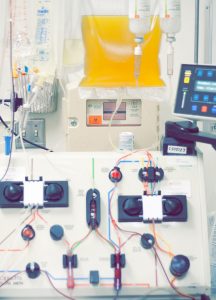 There are two ways to separate the components of blood:

Although the term plasmapheresis technically refers only to the removal of plasma, it is also widely used to encompass therapeutic plasma exchange in which a replacement product is transfused after removal of the plasma.

As distinct from plasmapheresis, cytapheresis is the selective removal of RBCs, WBCs, or platelets and can be accomplished by using identical centrifuge-based equipment. Applications include the following:

Erythrocytapheresis (selective removal of RBCs) is used in conditions such as sickle cell disease or malarial infection, in which RBCs are selectively removed and replaced with donor erythrocytes.

Leukapheresis (selective removal of WBCs) is used in conditions such as hyperleukocytosis, in which a pathologically high number of white cells are present (as, for example, in leukemia); it can also be used to collect peripherally circulating stem cells that can then be infused in an autologous or allogeneic stem cell transplant.

Platelet apheresis (selective removal of platelets) can be used in conditions of thrombocytosis (eg, essential thrombocythemia and polycythemia vera)

Plasmapheresis is currently used as a therapeutic modality in a wide array of conditions. Generally, it is used when a substance in the plasma, such as immunoglobulin, is acutely toxic and can be efficiently removed. Myriad conditions that fall into this category (including neurologic, hematologic, metabolic, dermatologic, rheumatologic, and renal diseases, as well as intoxications) can be treated with plasmapheresis.

Therapeutic plasmapheresis is a process by which constituents of plasma that are supposed to cause or aggravate disorders are selectively removed. The remaining components of blood are then mixed with a plasma substitute or an inert replacement and given back to the patient. Blood components that are removed may include immune complexes, lipids, antibodies, toxins, mediators of complement activation or inflammation. Molecules, that are supposed to be potentially harmful, are also removed.

This procedure is used for treating many autoimmune diseases with different success rates. Typically, the process is used to rapidly lessen immune complexes or circulating antibodies during autoimmune conditions. The method is frequently used along with other immunosuppressive therapies that help to enhance its beneficial effects or make them more long-lasting.

The Apheresis Applications Committee of the American Society for Apheresis periodically evaluates potential indications for apheresis and categorizes them from I to IV in the basis of the available medical literature. The following are some of the indications, and their categorization, from the society’s guidelines.

Category I (disorders for which apheresis is accepted as first-line therapy, either as a primary standalone treatment or in conjunction with other modes of treatment) are as follows:

Category II (disorders for which apheresis is accepted as second-line therapy, either as a standalone treatment or in conjunction with other modes of treatment) are as follows:

Category III (disorders for which the optimal role of apheresis therapy is not established; decision-making should be individualized) are as follows:

Category IV (disorders in which published evidence demonstrates or suggests apheresis to be ineffective or harmful; institutional review board [IRB] approval is desirable if apheresis treatment is undertaken in these circumstances) are as follows:

A plasma exchange can help to alleviate symptoms of the conditions above by removing harmful substances from the blood.

If a person has an autoimmune condition, plasma exchange may also prevent the body from producing more harmful antibodies.

The procedure is usually one element of a treatment plan, which may include chemotherapy. Repeated plasma exchanges may be necessary.

A medical professional will perform plasmapheresis, usually in a hospital but sometimes in a private clinic.

Premedication with acetaminophen, diphenhydramine, and hydrocortisone are often given.

A local anesthetic will numb the affected area, and the procedure should not cause pain.

The doctor will then insert a small tube into a vein in the arm or the groin. The tube will bring blood to the machine, which will collect it, treat it, and return it to the body.

Plasma exchange takes between 2 and 4 hours. A person will need to remain as still as possible to help the blood to flow smoothly. It may help to watch television or read as a distraction.


A medical professional will be present and check for side effects throughout the process.

After the plasma exchange is complete, the machine will be disconnected, and new blood tests will be performed. 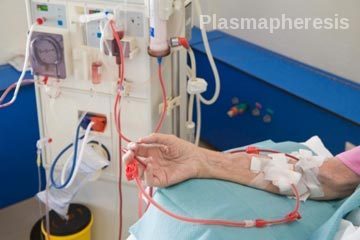 Patients can experience symptoms of hypocalcemia and or hypomagnesemia during and after the procedure and can be treated with replacement calcium and magnesium, respectively.

Patients frequently become hypothermic during the procedure, in which case they should be warmed appropriately.

Patients can experience transfusion-related reactions, in particular with FFP, and should be treated with diphenhydramine, hydrocortisone, and/or epinephrine depending on the severity of the reaction. These reactions can occur during and after the transfusion.

Patients can experience hypotension as a result of rapid fluid shifts, and proper precautions should be taken to minimize complications such as unintended falls.

Patients can become thrombocytopenic and hypofibrinogenemic after plasmapheresis (especially if albumin is being used as a replacement product) and should be monitored for signs of bleeding.

Patients may also be at further risk for developing hypotension if they have a history of taking angiotensin-converting enzyme (ACE) inhibitors, in particular, while undergoing column-based plasmapheresis. The suspected mechanism is related to increased bradykinin levels caused by the use of ACE inhibitors. This accumulation of kinins leads to hypotension, flushing, and gastrointestinal symptoms. Patients are therefore advised to stop all ACE inhibitors at least 24 hours before starting plasmapheresis.

Plasmapheresis is contraindicated in the following patients:

The cost of Plasmapheresis is quite high. Per session of this method can cost anywhere between five thousand and ten thousand dollars in the United States. In some cases, this process may be required to be carried out repeatedly. It will help if you have a medical insurance to take care of the costs.

Brian Weinshenker, M.D. a Mayo Clinic neurologist, describes the process of plasma exchange in the treatment of multiple sclerosis or neuromyelitis optica at Mayo Clinic. 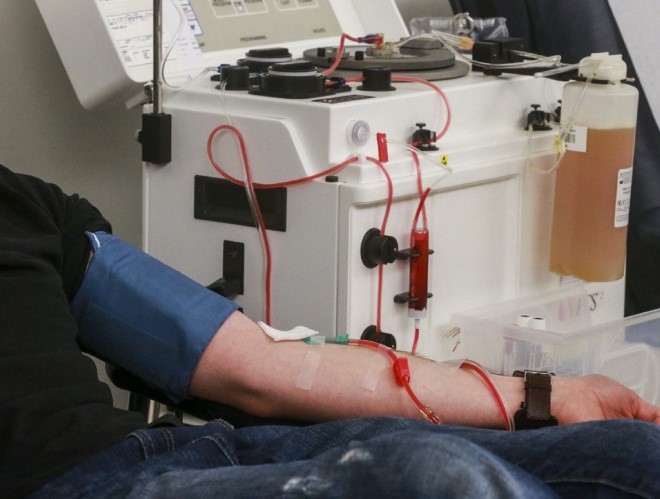 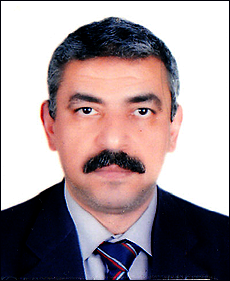