Positron emission tomography (PET) scans are used to produce detailed 3-dimensional images of the inside of the body. PET imaging in hematology has become a cornerstone procedure which is particularly helpful for investigating confirmed cases of cancer to determine how far cancer has spread and how well it’s responding to treatment.

PET is a nuclear medicine medical imaging technique that produces a 3-D image of functional processes in the body. A PET scan uses a small amount of a radioactive drug, or tracer, to show differences between healthy tissue and diseased tissue. The most commonly used tracer is called FDG (fluorodeoxyglucose), so the test is sometimes called an FDG-PET scan. Before the PET scan, a small amount of FDG is injected into the patient.

Because cancer grows at a faster rate than healthy tissue, cancer cells absorb more of the FDG. The PET scanner detects the radiation given off by the FDG and produces color-coded images of the body that show both normal and cancerous tissue.

PET scans are often combined with CT scans to produce even more detailed images. This is known as a PET-CT scan. PET-CT scans are generally thought to be more accurate in diagnosing cancer than PET scans alone.

With modern dedicated PET machines, a resolution of approximately 5 mm can be achieved. Moreover, using a quantitative approach to interpretation with the standardized uptake value (SUV) (ratio of activity per volume unit over injected activity per body mass), PET imaging is more precise than conventional scintigraphy.

An SUV of 2.5 or higher is generally considered to be indicative of malignant tissue; however, there has been a wide range of SUVs reported for similar diseases. It is important to recognize that an SUV around 2.5 can be measured in non-malignant regions. Conversely, small tumors can also exhibit a maximum SUV of < 2.5.

PET-CT scans can help to:

A PET-CT scan can also show how well a cancer treatment is working.

PET scans may also occasionally be combined with an MRI scan (known as a PET-MRI scan).

PET scanners work by detecting the radiation given off by a substance injected into the arm called a radiotracer as it collects in different parts of the body.

In most PET scans a radiotracer called fluorodeoxyglucose (FDG) is used, which is similar to naturally occurring glucose so the body treats it in a similar way.

By analyzing the areas where the radiotracer does and doesn’t build-up, it’s possible to work out how well certain body functions are working and identify any abnormalities. For example, a concentration of FDG in the body’s tissues can help identify cancerous cells because cancer cells use glucose at a much faster rate than normal cells. 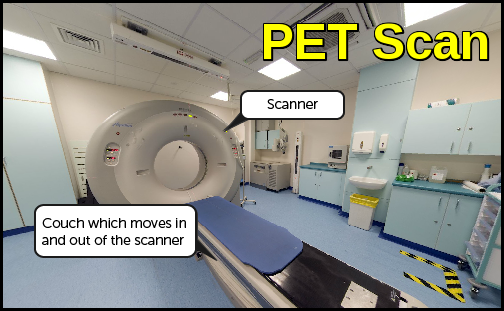 The adoption of the PET scan has been most notable in the treatment of lymphomas where its incorporation into the care of Hodgkin’s and non-Hodgkin’s lymphomas is now virtually universal. PET scans have clearly impacted the way lymphomas are staged and treated, particularly those types with the potential for cure, such as classical Hodgkin’s lymphoma and large cell and/or aggressive lymphoma. 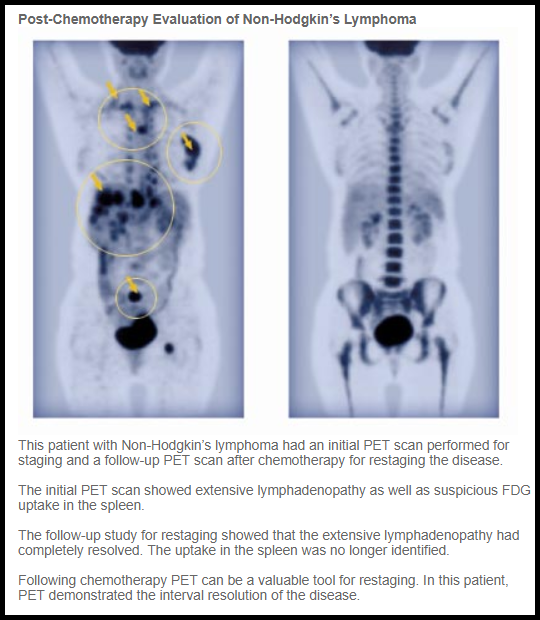 PET scans, because of their enhanced sensitivity and convenience, have almost totally replaced gallium scans. Unlike gallium scans, PET scans are routinely used in staging since the scans are able to reveal disease in normal-sized lymph nodes (on CT scan) which would otherwise have been interpreted as unremarkable.

PET scanning has altered treatment approaches as well. For instance, bulky masses, despite being sterilized of lymphoma, are often characterized by some residual mass or scar. Using conventional means, it has been difficult to determine whether the residual mass after treatment did or did not contain active disease. As a result, these masses had been routinely irradiated even if a biopsy showed scar (because of possible sampling error). Although many still advocate irradiating bulky masses, the advent of the PET scan has engendered a rethinking of this approach when no disease activity is apparent.

PET Scans in the Staging of Lymphoma:

Staging has an important role in the treatment of all malignancies but is critically important for patients with lymphoma. Accurate staging allows minimization of toxic therapies, such as extended-field radiation or overly aggressive chemotherapy, decreasing the risk of secondary malignancies, which exceeds 10% in several historical series of patients with early-stage Hodgkin’s disease. Patient quality of life during and after treatment may also be improved with tailored therapy defined by staging.

Most studies of PET involve patients with either Hodgkin’s disease or diffuse large B-cell non-Hodgkin’s lymphoma. PET detects more disease sites above and below the diaphragm on the staging of lymphoma than gallium scintigraphy and may have particular utility in the evaluation of the spleen. Perhaps more importantly, PET may help to characterize a residual mass on anatomic imaging following therapy as either fibrosis or residual active lymphoma. Moreover, persistently positive PET scans during and after chemotherapy appear to have a high sensitivity for predicting subsequent relapse. A negative PET scan at the end of therapy provides very favorable prognostic information.

The majority of studies evaluating FDG-PET in lymphoma include patients with diffuse large B-cell non-Hodgkin’s lymphoma (NHL) or Hodgkin’s disease. There are limited data available on the role of PET in other histologies. A retrospective review of 172 patients with various types of lymphoma who underwent FDG-PET imaging was completed at the University of Pennsylvania. Only 6% of those patients had no evidence of disease on PET scans. FDG-PET accurately detected disease in patients with diffuse large B-cell NHL, mantle cell lymphoma, follicular lymphoma, and Hodgkin’s disease. PET was less reliable at detecting marginal zone lymphoma, a finding that has been confirmed by other groups, particularly in the case of extranodal marginal zone lymphomas.

In another study, limited to patients with indolent B-cell lymphomas, PET appeared to have potential to contribute to the management of patients with follicular NHL, but sites of disease in patients with small lymphocytic lymphomas were only detected approximately 50% of the time. Small series have suggested that using SUV to determine the intensity of FDG uptake, PET may be able to predict the histologic transformation of indolent lymphoma; however, the relationship among pathological subtype, mitotic rate, and SUV remains controversial. 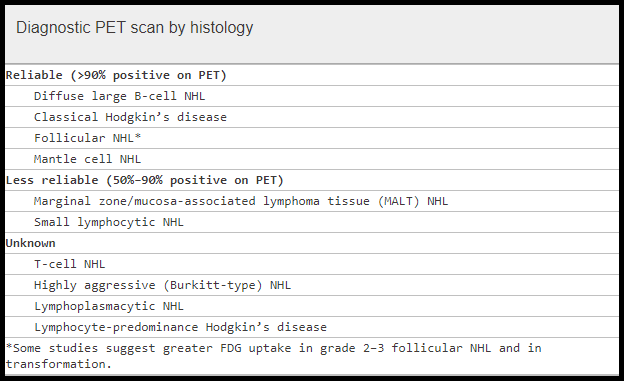 Your doctor will give you detailed instructions on how to prepare for your scan. A general rule is to not eat anything for at least 6 hours before the scan. You will be encouraged to drink water. Wear comfortable clothes.

A nurse or technologist will take you to a special room where you will receive an intravenous (IV) injection of the radioactive drug. Sometimes, you will be asked to inhale the drug instead. Then you will wait 30 to 90 minutes for the drug to travel through your body and accumulate in the tissues being studied. During this time, you will rest quietly and avoid movement. You won’t be able to feel the drug in your body.

You will lie on a narrow table that slides into a circular opening of the scanner. The size of the opening is 27 to 30 inches. How much space you feel you have around you will depend on your body size and the scanner used. A mild sedative may be used to help you feel more comfortable during the exam. If you feel any anxiety over being in enclosed spaces, let your doctor know.

The functional information obtained by a PET scan is unique and unavailable using other types of imaging. For many diseases, PET provides the most useful information required to make a diagnosis and determine the most appropriate treatment.

Although a radioactive tracer is used during a PET scan, the amount of radiation that you are exposed to is low and it is short-lived. It is not enough to affect normal body processes. However, there are risks due to the tracer:

What is a PET-CT scan? https://www.ed.ac.uk/clinical-sciences/edinburgh-imaging/for-patients-study-participants/tell-me-more-about-my-scan/what-is-a-pet-ct-scan